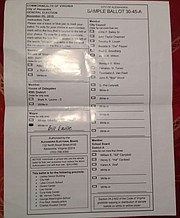 The back of the Write-In Euille campaign flyer.

“NOTICE: Individuals or groups who use this sample ballot for their own purposes must replace the above authorization line with their own.”

Blocked off from the rest of the page, this warning was placed beneath the part of a sample ballot marked “Authorized by the Alexandria Electoral Board.” Just below that warning, to the right, is another box that warns that the Code of Virginia prohibits copying or distribution of sample ballots on white or yellow paper. Both warnings are visible on the back of a flyer distributed by the Write-in Euille campaign. Also visible? The “Authorized by the Alexandria Electoral Board” still on the back of a sample ballot reprinted on white paper.

Write-In Euille is the team working to reelect incumbent Mayor William Euille despite his loss in the Democratic primary to Vice Mayor Allison Silberberg. The violations were reported to the Alexandria Electoral Board, which in turn reported the violations to the state level Elections Board.

Leider explained that the rule about white and yellow paper stems from concerns that citizens might mistake them for actual ballots. While the voting machines would not register them as ballots, Leider says it can still be an issue that confuses voters.

“As soon as we saw this, we told the campaign and they indicated that they would be replacing all of these,” said Leider. “Because the authorization line is a violation of the campaign financing laws, it’s a violation that gets reported to the state board of elections. They handle that. Any additional penalties would come from them.”

Rose Mansfield, a spokeswoman for State Board of Elections, said that the state had received the violation but that the board does not take action until November, after the election is over. Depending on the ruling, the campaign could face a fine of $50. Eric Williams, chairman for the Write-In Euille campaign, said that the flyers without the proper authorization on the front and back were only distributed to a small number of people, and the new flyers are in blue with proper authorization on the front and back.