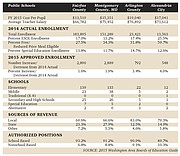 Fairfax County Public Schools has reduced per pupil spending by 6.5 percent over the same period, adjusted for inflation, but FCPS spends significantly less per student than either Alexandria or Arlington.

These numbers are from a draft report released last month by the Joint Legislative Audit and Review Commission in a report on Efficiency and Effectiveness of K-12 Spending 2015. In FY 2014, the average Virginia school division spent 7 percent less to educate each student than it did in FY 2005.

These numbers are critical to understand as local schools, Fairfax County in particular, face a looming budget gap in the coming budget cycle. It’s easy to skip the specifics, look at a large overall budget number and conclude that surely there is plenty of room to cut the budget. These numbers show the problem with that approach.

Fairfax County was among the Virginia school divisions with a reduction in resources and numbers of teachers per student which also had a growing percentage of “resource-intensive” students.

More than 27 percent of Fairfax County Public Schools students were living in poverty in 2014; that’s 49,895 students, up from about 18 percent or 28,527 poor students in 2005. Number and percent of students with limited English have also grown over the time period. In 2014, 49,442 students, or 27 percent, in FCPS are limited English proficient, up from 35,091 or 22 percent in 2005. The report calls these students “resource intensive,” and what that means is that it costs more to effectively teach them.

The larger chart comes from a different source, the 2015 Washington Area Boards of Education Guide, and shows Fairfax County with far lower per pupil costs and teacher salaries than surrounding school districts.

As the saying goes, if you think education is expensive, try ignorance. And if you think it’s too expensive to effectively educate the population we have, consider the costs of services to people who don’t have the education they need to live successfully later in life.

Effective leaders in Northern Virginia will have to lead the way to funding effective school systems in a challenging economic environment. But if you hear a candidate claim that schools can get by on less by being more efficient, ask if they have read this report.

According to the JLARC report: School districts reduced per-student spending on instruction through a combination of employing fewer teachers per student, limiting teacher salary growth, and requiring teachers to pay a higher percentage of health insurance and retirement benefit costs. Divisions report that these spending reductions are hindering instructional effectiveness.

You can read the Virginia JLARC report here: http://jlarc.virginia.gov/pdfs/reports/Rpt472.pdf