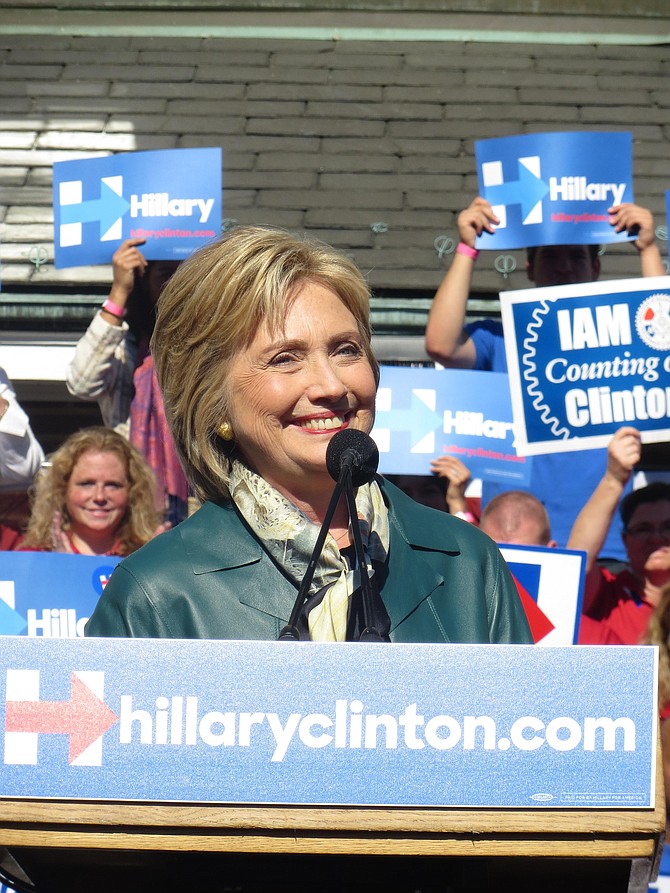 Hillary Clinton, Candidate for the Democratic Nomination for President Photo by Vernon Miles.

It’s 1:25, five minutes before Hillary Clinton is set to take the stage, and the crowd is getting anxious. The same three Pink, Kelly Clarkson, and Taylor Swfit songs had been playing on repeat since the cordoned off segment of Market Square was opened to the public at 9 a.m. that morning, Oct. 23. It’s beginning to have an impact on the psyche of the Hillary fans.

“You can use my iPod,” one woman yelled to the campaign volunteers, echoed by a chorus of cheers from the crowd. But just as the songs drive the mob to fever pitch, Clinton emerges from Alexandria’s City Hall alongside Gov. Terry McAuliffe, and the crowd’s demeanor immediately changes to delight. Many have been waiting for six hours for a chance to see the candidate for the Democratic nomination for President.

McAuliffe, a longtime friend of the Clinton family, declared Virginia “Clinton territory” and described Hillary Clinton as a fighter for women’s rights and healthcare reform. 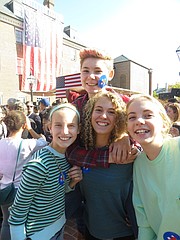 Clinton started with a brief homage to Alexandria’s history, noting that American Presidents as far back as George Washington had a connection to the city. In more contemporary politics, she thanked 8th district U.S. Rep. Don Beyer and state Sen. Richard “Dick” Saslaw from the 35th district.

“We either build on Obama’s progress,” said Clinton, “Or we give the Republicans a chance to tear it all down again.”

Clinton reflected on the moment when Obama approached her to be Secretary of State and, in a private meeting, confided to her that he believed the state of the county was much worse than the Republicans in power had let the country know.

As President, Clinton said she would fight against pay inequality, student debt, and gun violence.

“We’re fighting to protect families and communities from the plague of gun violence,” said Clinton, “I publicly thank [McAuliffe] for his executive order banning guns in state buildings and for his task force to better prosecute gun crimes.”

Carlos San Miguel, a new Alexandria resident, said that he was happy to hear her address student debt and promise that she would take care of military families. Kerry McKenney, from Shirlington, said he was amazed at how composed and energetic she was the day after the Benghazi hearings.

“I thought she hit a home-run,” McKenney said. “I was happy to hear her talk about lifting up the working families. I’m retired, but I see so many young families out there really struggling.”

The crowd is mixed between long time Clinton supporters and some who are still fairly new, or even still undecided, on her as a candidate. Gene Dunn, who was selected to sit in the stands behind the podium, wore a homemade shirt with the words “Welcome Madame President” emblazoned across the front. Dunn said his daughter had worked with Clinton during her husband’s presidency, and said he was ecstatic to meet her again.

But another common sentiment in the crowd was uncertainty in Clinton before the Benghazi hearings the day before. Ross LaBaugh said he ultimately made up his mind as he watched the hearings.

“Up until yesterday, I wasn’t sure if I’d support Hillary [Clinton],” said Ross LaBaugh, an Alexandria resident. “But she was brilliant. She held up excellently, and I’m very excited to be here now.”

“I feel great about today,” said Matt Barrett, also from Alexandria, “especially after yesterday, when they tried to roast her. But I’d still give her an A+. She’s eminently qualified. She’s my candidate, and I really think we need a woman in the White House.”

LaBaugh and Barrett both cited women’s issues as their primary issues in the campaign. Women noticeably outnumber men at the rally by at least a one to five ratio.

“I feel that she has the country’s best interests at heart,” said Shantel Goodman. “She’s vocal about the issues that keep people up at nights. She’s the right person for the job. Obama has done an excellent job getting started turning things around and I don’t think he gets the credit he deserves.”

“Besides,” said Kia Davis, “who wouldn’t want to see a woman as president?”