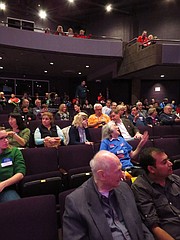 Supervisor John W. Foust mentioned numerous endorsements he has already received and highlighted achievements he has made with the community.

“I am running on my record as a civic leader,” said Foust, who has served Herndon, Great Falls and McLean for eight years as the Dranesville District Supervisor.

“I didn’t come out of nowhere to be your Supervisor,” said Foust.

He also claims balancing eight straight budgets; identifying savings for taxpayers as Chair of the Audit Committee; developing the long-term strategic plan as Chair of the Economic Advisory Commission to diversify the economy and protect schools; leading the fight to ensure funding for the Route 7 widening project; helping get Phase I of the Silver Line Metro built – and working to get Phase 2 to Herndon and beyond; and passing county’s first ever tree preservation ordinance.

FOUST’S OPPONENT Jennifer Chronis (R) said it is her leadership that differentiates her from Herndon’s incumbent Supervisor.

“I’m a leader who can get things done,” said Chronis.

She said she took a leave of absence as a vice-president at IBM to focus on the race full-time, seven days a week. That’s the dedication she will have for position, she said.

With his next turn in the 50-minute debate, Foust said, “I have been working seven days a week for the last 8 years,” said Foust.

THE DEBATE raised a notch in intensity when Chronis, for a second time, said that Foust supports tolling I-66. She did so at the Great Falls Citizens debate in September. Foust said he does not support tolls on I-66.

Other Republican candidates have used this line of attack.

Danny Vargas (R) has also said that Jennifer Boysko (D) supports tolls on i-66 in multiple political mailings in their race for Delegate in the 86th district.

“Republican candidates are desperately trying to find an issue and they are claiming that their opponents support the tolling,” Foust said. “I’m telling you, pay attention to the facts.”

Murphy had to say the same thing in her debate with Parisot. At their debate in Great Falls on Sept. 29, she said: “I didn’t say that I supported [tolls on I-66]. I didn’t come here to slam Craig. He’s a nice guy. We’re opponents and we’re not enemies and this should be a friendly debate,” she said. 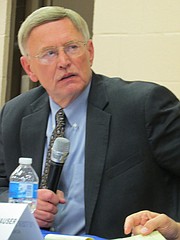 John Foust has been the Dranesville Supervisor the past eight years.

QUESTIONS RANGED from Northern Virginia’s economy and diversification, traffic congestion, the impact of Tysons on McLean, school budget problems and relationship between the Board of Supervisors and School Board, and the county’s Triple AAA Bond rating.

Fairfax County is one of 37 counties in the country with a AAA bond rating, which saves millions of dollars annually in interest.

Foust gave assurance how the county has made the steps the bond rating companies suggested making, while Chronis tried to show why she thinks county is in trouble.

Chronis suggested she was the level headed candidate when the community was upset regarding the new gun store adjacent to property of Franklin Sherman Elementary School in McLean.

“This has been such a highly emotional issue for our community. I understand the parents concern and we can all agree that safety of our children needs to be the number one priority,” she said. “These store owners have done nothing illegal. … Now, we are at a point we need to talk as adults and leaders how to get a solution.”

While Chronis didn’t suggest what the solution should be, Foust didn’t mince words even though the gun store has a right to rent property in McLean.

“It may be by right, but it’s not right. No gun store should be next to an elementary school,” said Foust. “The community is doing a fabulous job keeping the issue alive.”

He said he has been working with the gun store owner and the business community to figure a different location for the store.

Chronis said that Foust used the issue as a politician.

“I believe it is the role of the elected official to do something to solve, to deescalate the situation. It is not the role of fanning the flame only for the purpose of political gain,” she said. 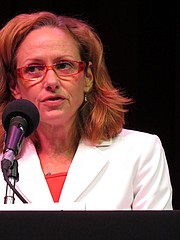