Suffragist Memorial in Lorton Will be a ‘Site of Conscience’
Votes

Suffragist Memorial in Lorton Will be a ‘Site of Conscience’ 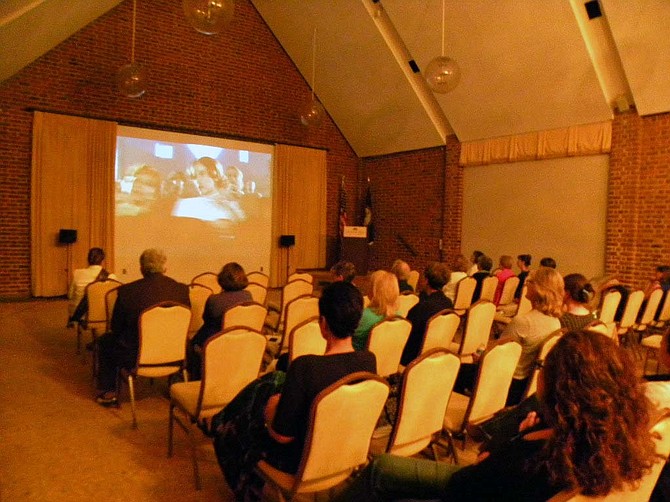 Turning Point Suffragist Memorial Association held a viewing of “Iron Jawed Angels” at Gunston Hall in Lorton on Wednesday, Aug. 26, Women’s Equality Day. The film portrays the plight of suffragists in the National Woman’s Party and their imprisonment in the Occoquan Workhouse. Photo by Abigail Constantino/The Connection

The Turning Point Suffragist Memorial Association held a viewing of the 2004 film “Iron Jawed Angels” directed by Katja von Garnier on Wednesday, Aug. 26 at Gunston Hall in Lorton. The 19th Amendment giving women the right to vote was ratified on this day 95 years ago in 1920. The date is designated as Women’s Equality Day. 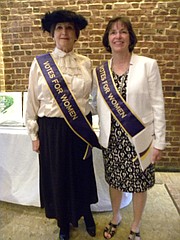 The free viewing is part of an effort by the association to raise funds for a suffragist memorial that will be located in Occoquan Regional Park. The site is in close proximity to the former Occoquan Workhouse where protesting suffragists were held in 1917. The Frederick P. Griffith Water Treatment Plant now sits on the old workhouse location.

There is a hidden history of the place, said Nancy Sargeant of Turning Point Suffragist Memorial Association. The film illuminates the imprisonment, abuse and torture Lucy Burns, Alice Paul and other suffragists endured while protesting outside the White House in 1917.

On Nov. 14, 1917, Burns and 32 other members of the National Woman’s Party were beaten and tortured under the orders of workhouse superintendent W.H. Whittaker. Burns was manacled in her cell with her hands over her head, while other women were knocked out, kicked, grabbed and beaten, one even suffering a heart attack, on the “Night of Terror,” as it came to be known.

THE FILM takes several artistic licenses. To separate fact from Hollywood, the association arranged a “tweet-along” with the viewing. Using the tag #ijawithtpsm, association members added facts about the events corresponding to the movie’s scenes. People were also encouraged to tweet their comments using the tag.

Sargeant said it is a way to stay engaged while watching the movie. The tweets included “interesting facts, what’s real, what really happened,” she said, but the history in the story is pretty accurate.

Social media is an effective way to reach younger audiences who might be less likely to know about the history of women’s suffrage,”said Lauriane Lebrun, the association’s social media intern.

The Turning Point Suffragist Memorial Association hopes to raise $1 million by fall to start on the first phase of the garden memorial. Architect Robert Beach said that it will be a “site of conscience.” Design elements include a front entrance reminiscent of the 1917-era White House entrance where the women protested, a waterfall, footbridge and 19 different information stations representing the 19th Amendment.

Board member Candice Bennett, of Lorton, said that memorializing and recognizing the suffrage movement is an incredible, important issue. “We would not be where we are today if it hadn’t been for these women. We can’t forget about it,” she said.

“The fight is not over,” said association board member Kathleen Pablo, who attended the viewing dressed in period clothing of the film’s era.

“[It’s] the 95th anniversary of having the right to vote but our choices of who we’re gonna vote for are people who call us bimbos or want to claim ownership over what we do with our own bodies,” said Erin Ryan, of Fairfax Station.

Pablo and Bennett said that it is important to be aware and informed of the issues when casting one’s vote. “A lot of major decisions that affect women’s lives and families happen at the local level,” said Bennett. It is “critical” to stay abreast with state delegate and senate races, she said.

The League of Women Voters of Fairfax Area will hold several county-wide meet-and-greet events with the candidates. Schedule and information is posted on its website, http://www.lwv-fairfax.org/2015MeetandGreet.html.