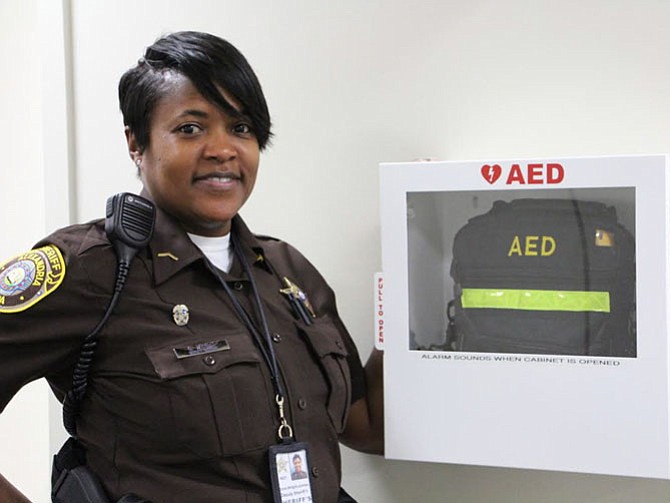 Deputy Gloria Wright with the AED on the rhird floor of the Alexandria Courthouse. Photo Contributed

In January, Judge Thomas J. Kelly Jr. in Arlington saved a man’s life. A victim of a trespassing was testifying in trial when he began to exhibit signs of a heart attack. Kelly cleared the courtroom and leapt down from the bench to begin performing CPR on the victim. With chest compressions and mouth-to-mouth resuscitation, Kelly kept the victim alive until EMTs arrived on the scene, took the man to the hospital, and stabilized him. EMTs at the scene credited Kelly’s quick action as potentially life saving, but in a way, Kelly’s actions might begin saving more lives in Alexandria.

The victim’s sister-in-law, Monica Hart, is a legal secretary in the office of the commonwealth’s attorney in the Alexandria Courthouse. She relayed the story to a member of the Sheriff’s Department, who works security at the courthouse, and the story eventually found its way to Sheriff Dana Lawhorne.

“[The story] caused me to stop and take an inventory of what we do,” said Lawhorne. “I realized we only had one in the courthouse, so I initiated the process to get more of them.”

“Having them in public buildings is not a new idea,” said Lawhorne, “but this is the first time they’re being put in non-fire vehicles in the city.”

Hart said she was surprised to see the new defibrillator units in the courthouse and didn’t connect that it was all the result of her brother-in-law’s heart attack until someone from the Sheriff’s Department told her. Her office is undergoing training on how to operate the defibrillators this week.

“I’d never seen that before,” said Hart. They have fire extinguishers and such. It’s a great idea and I think it’s a really good thing. I was relieved when I saw them. If no one knew CPR, that person wouldn’t make it.”