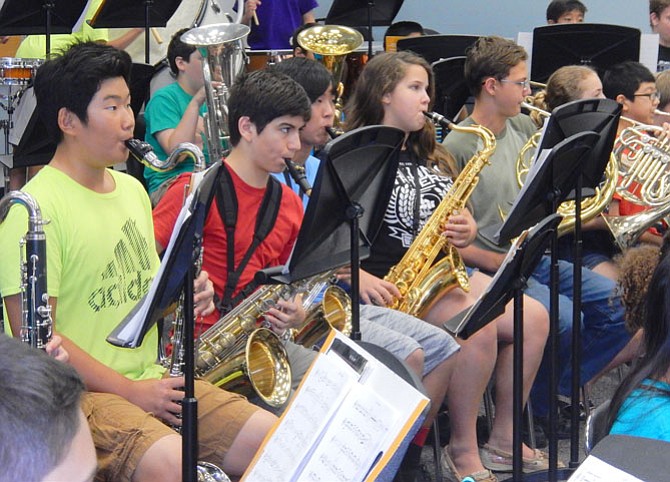 Students play saxophones and other brass instruments with the symphonic band. Photo by Bonnie Hobbs.

Violinists practice with the intermediate orchestra.

Whatever their reasons were for attending Franklin Middle School’s Band & Orchestra Camp, the results for the students were the same — knowledge, improvement and fun.

Rocky Run Middle seventh-grader Alexander Alvarez and his sister Christina, a Poplar Tree Elementary sixth-grader, attended for the first time. Both play clarinet and had a great time there.

“I came because it sounded like fun and that I’d make new friends, which I did,” said Christina. “I’ve been learning new notes every day, and I like that they walk you through it. When I first came here, I didn’t know the names of all the keys or how to play particular notes, and I also learned some new techniques. I’d definitely recommend it to others because it’s a really fun and interesting camp and you’ll learn a lot.”

Alexander plays his mom’s old clarinet and loves playing in an orchestra because “it’s so lively and super fun.” His mom suggested he attend this camp because he’d get more music instruction here than in school. And he liked the idea of “playing clarinet for four hours straight with people of all different ages. The camp helps you grow as a musician a lot faster, and you can make new friends from all over.”

Also there for the first time was Lees Corner Elementary sixth-grader Molly Shear. “I didn’t want to forget everything I learned, over the summer, and it seemed like a fun camp,” she said. “And lots of kids in my class were going, so I’d know a lot of people.”

She’s played clarinet a year, inspired by her grandfather, who played it, too. “I like that you can put fingers down on the keys and that note will come out without changing air,” said Molly. “And at camp, you learn a lot, develop more range and get more practice.”

Oak Hill Elementary grad Sujay Khona, now a Rachel Carson seventh-grader, has played clarinet three years. Why? “It’s not as heavy as a tuba or saxophone, and it’s not that hard to play,” he said. “I did this camp last year because my school music teacher recommended it, and I really liked it, so I came back. It teaches you a lot so you can get a head start on the school year, and I get to hang out with friends during lunch.”

Kara Kongprasert, a Stone Middle seventh-grader, has played violin four years. “It’s different from other instruments and I like playing the high notes and the melodies,” she said. “And playing the lighthearted songs makes me feel happy. It’s my second year at camp and it really helps me better my skills.”

She said the teachers understand her weak points and “help me improve to be successful. The staff’s friendly and kind and you get to make new friends at camp. I also learned to be patient with myself and keep practicing every day until I get it.” 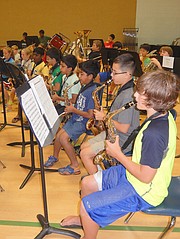 Chantilly High freshman Deepika Gunturu likes the violin because “it plays the melody in a lot of pieces, and lots of my friends play it, too, so we can play together. This was my second year at camp, and I felt like I learned a lot. And since it wasn’t all day, I still had time to do other things.”

She especially enjoyed playing chamber music there and seeing all the special performances by the band and orchestra. And, she added, “I learned a lot of new songs and all the teachers are really nice.”

Ryan Vu, a seventh-grader at Stone Middle, has played saxophone two years. “It’s a cool and popular instrument,” he said. “It’s easy to play, but hard to master. This was my first year at camp; I needed more practice. I’ve learned some new fingerings and musical vocabulary.”

He also liked making new friends and said he’d be better prepared for Stone’s band because of his camp experience. “It’s fun and there’s lots to learn,” said Ryan. “And some people here might be going to the same school you are.”

Carrie Fessner, a middle-school band teacher in Prince William County, taught the clarinet sectionals. “It’s a long drive, but worth it,” she said. “And it’s nice to just see clarinets. Instead of only teaching students once or twice a week, I get to teach them every day, so the pacing is quite fast. So in almost four weeks’ time, they’ve learned the equivalent of roughly a whole, school-year’s-worth of material — and that’s really impressive, especially with the beginners.”

Besides that, she said, “This camp keeps students playing over the summer, and it’s a much better start to the school year for them. And it’s been a ton of fun. The kids are great; they’re really nice and want to be here. I’ll definitely come back next year.

“It’s mentally rejuvenating because they’re so excited and ready to learn, and you can see their progress very quickly. And what we work on here gets reinforced in their full band and sectional experiences here, too.”

Oakton High freshman Yingyin Chen likes playing flute because “many other instruments are vertical, but you play the flute horizontally.” She came to camp because her bandmates from school did, so she thought it would be fun. “I love the interesting and challenging pieces we’re doing,” said Chen. “And you improve your musical skills while getting more experience fitting in with a group.”

Agreeing, Franklin eighth-grader Julia Yoon was a second-timer at camp because “I improved dramatically last year. My favorite part is making friends with kids from other schools; I actually met my best friend here last year.”

Chantilly High senior Madelyn Donnelly has played the flute nine years and taught flute sectionals at the camp for her second summer. “I love it because, while I’m teaching, I’m learning from the kids and from flute teacher Teri Davis who also teaches flute and band at Greenbriar West and Oak Hill elementaries,” said Donnelly. “It’s because everyone has a different style of playing.” And camp’s valuable to the students, she said, because “the beginners have gone from just picking up a flute for the first time to playing full-length songs.”

A six-year viola player, Westfield High sophomore Owen Carlson enjoyed himself so much last year that he returned to camp again. “I learned how to hold my instrument up higher so my notes wouldn’t be flat,” he said. “And I had fun getting to know new friends and playing good music. I’m in Westfield’s orchestra and, hopefully, this’ll help me chair really high in it.”

Playing trombone at camp was Rocky Run seventh-grader Quentin Wiseman. He said the trombone’s cool because “you can always fix a note by moving your slide to blend it.” At camp, he learned how to blend in his playing with woodwinds and other brass instruments.

His favorite new song was “Corridors of Castle Doria” because “it has different emotions in it and I like how it sounds.” He’d recommend the camp because “there are always fun things to do, you get to work in multiple groups and you improve a lot.”