First Round in the Fight for Alexandria's City Council
Votes

First Round in the Fight for Alexandria's City Council 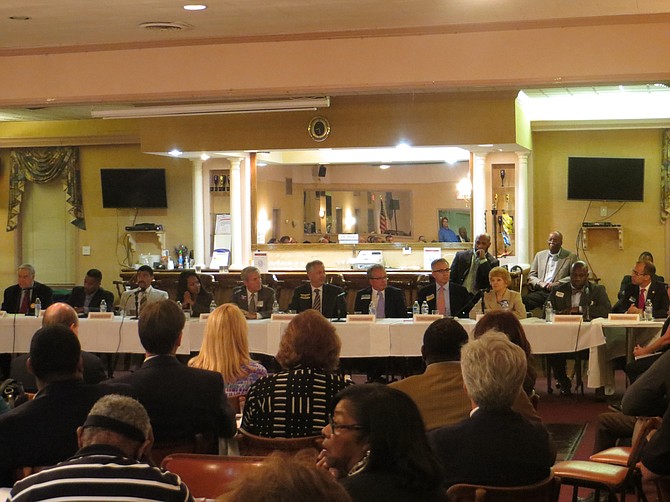 The long table at the front of the Departmental Progressive Club in Old Town was packed with candidates. In a very visible symbol of the campaign: Republicans, Democrats, incumbents, challengers, and an independent all sat elbow to elbow at a table that took up the width of the room. It was also standing room only in the rest of the building, as campaign staffers and curious Alexandrians turned out on Sept. 14 to see the 11 challengers for city leadership.

With only two hours and so many candidates, the answers were kept short and the conversation topics narrow, but already differences and similarities are beginning to emerge as local residents heard 11 visions for the future of Alexandria.

The next forums will take place on Sept. 17, with one at 8:20 a.m. at the U.S. Patent and Trademark Office, and the other at 7 p.m. at William Ramsay Elementary School.

Phil Cefaratti (I) - Refocusing school funding priorities towards teachers and students rather than large projects.

Cefaratti - Reduce hiring of outside consultants, work with local consulting firms or provide credits to local schools for student consulting.

Lovain - Acknowledge and work around reductions in office-filling jobs.

Smedberg - Build on the momentum of the NSF and TSA move to Alexandria.

Cefaratti - Need to focus on renovation of schools rather than building or rebuilding new ones.

Smedberg - Continue collaboration between School Board and City Council, as well as city and school staff.

Wilson - Dealing with capacity is priority. “We can’t redistrict our way out of this.” Increasing student populations is beginning to rise out of elementary into middle and high school levels.

Bailey - “We’re losing affordable housing every year, Alexandria should not just be a city for the wealthy.”

Miles - Open dialogues with developers to pay beyond minimal levels of contribution to Affordable Housing fund.

Lovain - Emphasize micro-unit development near metro stations as an affordable and creative solution.

Smedberg - Collaborations like the arrangement with the St. James Church for land needed for affordable units. Increase in micro-units for cost and space efficiency.

Pepper - New methods, like affordable units over the fire station at Potomac Yards, is the future of affordable housing development.

Chapman - Support and expand resources like the Alexandria Housing and Redevelopment Authority. Focus on affordable housing as part of West End development.

Van Fleet - The Federal minimum wage is $7.25 per hour. We are a Dillon rule state and cannot change that.

Bailey - $7.25 per hour is ridiculous. Despite Dillon rule, Alexandria needs to make sure businesses in the city understand that the city won’t tolerate this.

Wood - The sentiment is right, but Alexandria doesn’t have the authority. Best alternative is promoting good business development.

Cefaratti - High unemployment is the source of the trouble. Alexandria needs tax breaks for businesses that hire Alexandria’s unemployed.

Lovain - Alexandria is bound by the Dillon Rule.

Smedberg - City doesn’t have control to set minimum wage as per Dillon Rule.

Pepper - There were concerns about the impact on businesses when Alexandria implemented the “living wage,” but there were no negative effects.

Chapman - If Alexandria doesn’t have the authority, it needs to continue fighting for more local authority.

Wilson - Dillon Rule keeps Alexandria from establishing minimum wage, but the city can have a wage requirements for contractors and has an established local “living wage.”

Who the candidate is most excited to serve on City Council with:

Van Fleet - Most excited to work with other Republican candidates.

Bailey - Most excited to work with other members of the Democratic ticket.

Torrez - Excited to work alongside Chapman and Wilson.

Miles - Most excited to work with Smedberg, “I like a lot of his ideas.”

Lovain - Looking forward to working with all Democratic candidates.

Smedberg - Most excited to work with Chapman and, as members of the public, has learned a lot from Wood and Van Fleet.

Pepper - Most excited to work with other Democratic candidates.

Chapman - Enjoys sparring with Smedberg because of different perspectives.

Wilson - Looking forward to having Bailey on the Democratic ticket.