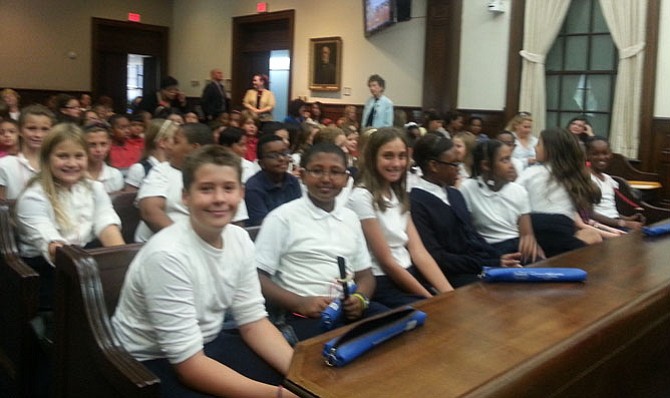 Students, teachers and staff from Lyles-Crouch Traditional Academy stand in front of City Hall after participating in the Constitution Week proclamation signing Sept. 21. Music teacher Debra Lindsay, far right, composed music that was sung by the students during the ceremony.

Students from across Alexandria gathered at City Hall Sept. 21 to participate in the signing of a proclamation to kick off Constitution Week, a week designated to promote the study and appreciation of the document sometimes referred to as “America’s birth certificate.”

“Prior to the crafting of the Constitution, the United States was operating under the Articles of Confederation,” said Linda Greenberg, Constitution Week chair for the John Alexander chapter of the National Society of the Daughters of the American Revolution. “There were inadequacies that needed to be corrected, such as creating three branches of government. Prior to the Constitution, there was only the Legislative branch. The country also needed a national mint and the power to raise an army. Most importantly, we needed a representative government. The Constitution established those things.”

Linda Greenberg, Constitution Week chair for the National Society of the Daughters of the American Revolution John Alexander chapter, talks about the significant role several Virginians played in crafting the Constitution during a proclamation signing ceremony Sept. 21 at City Hall.

To commemorate the Constitution, students from the four schools sang the “Preamble” and “The Bill of Rights RAP.” The music was composed by Lyles-Crouch music teacher Debra Lindsay. 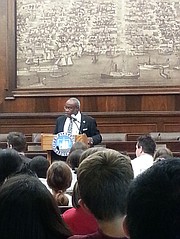 “We also highlight the role Virginians played in the crafting of the Constitution,” Greenberg added. “George Washington was the organizer and James Madison drafted the document. George Mason, who wrote the Bill of Rights, and Thomas Jefferson were also major contributors to our new Constitution.”

Constitution Week was started by the Daughters of the American Revolution. In 1955, DAR petitioned Congress to set aside Sept. 17-23 annually to be dedicated for the observance of Constitution Week. The resolution was later adopted and signed into public law on Aug. 2, 1956, by President Dwight D. Eisenhower.

“The program has been very well received in schools,” Greenberg said. “Being at City Hall allows the students to appreciate both the contributions of George Washington, James Madison and George Mason, our local founding fathers, to the government we have today, and to appreciate that this tradition continues today in our government at City Hall.”