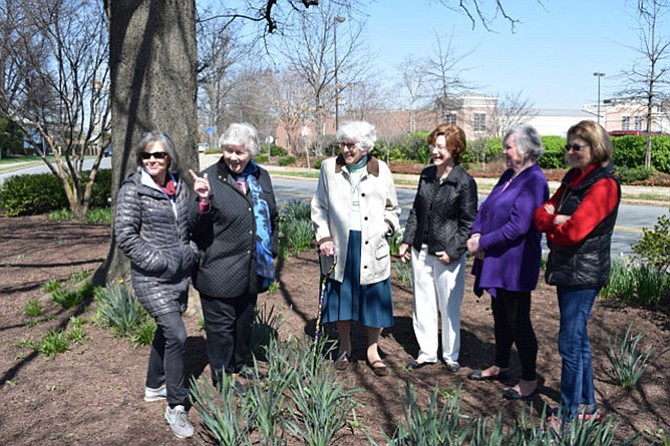 After 52 years of volunteer service to the McLean community, the Holly Hill Garden Club announced that it will no longer operate due to retiring members. In an act of generosity, the club distributed half of its remaining treasury funds to the McLean Trees Foundation in support of the planting and care of trees throughout McLean.

“We admire all the work that the McLean Trees Foundation does for our community and our support for MTF was an easy decision for our club,” said Joann Cochran, treasurer of the Holly Hill Garden Club.

The two organizations once worked closely together. Founded in 1964 and known as the “working garden club,” the Holly Hill Garden Club has been active in numerous civic development projects, garden therapy programs, plant clinics and beautification projects in McLean.

“We took on the responsibility to redesign the island and to raise funds for plants and materials,” said Cochran. “It took three years of intense work to get the project rolling. We raised funds by selling plants at McLean Day and we approached many local merchants for contributions. Some members of the club focused on the design aspects of the island while others refurbished the soil on the island by removing rocks, asphalt and construction debris.”

“It is with much sadness that we have to abandon our civic project of the traffic island in McLean,” said Cochran. “It was a labor of love for our club for many years.”

“The garden club’s efforts have fueled and enhanced MTF projects and many other sites in our community,” said Joyce Harris, Chairman of the McLean Trees Foundation. “In appreciation of their work, we plan to identify, on our website map, the willow oak tree in honor of the Holly Hill Garden Club. Their diligent and creative work will be missed.”

Thanks to Tom Jacobi, president of the McLean Revitalization Corporation, and Dranesville District Supervisor John Foust, the traffic island will now be cared for by Wheat’s Landscaping, a full-service landscape company in Northern Virginia committed to giving back to the McLean community.

“We are very happy to donate our services to the community to help care for the island,” said Mike Wheat, owner of Wheat’s Landscaping. “It’s a beautiful island.”