Three Cents This Year: But ‘Enough is Enough’ 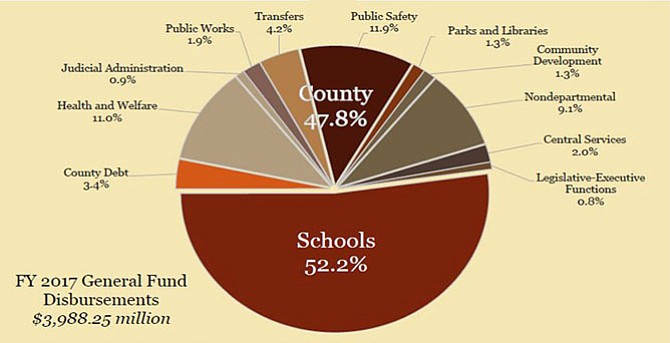 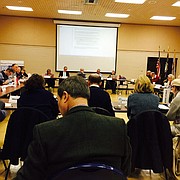 “In a spirit of compromise,” McLean Citizens Association advocates for the Board of Supervisors to adopt a 3-cent real estate increase not the advertised 4-cent increase.

Nine board members of the McLean Citizens Association wanted the civic association to tell the Board of Supervisors it wants no real estate tax increase.

“There is nothing sacred about the advertised budget. It is only a proposal to load an increased burden on taxpayers who are already overburdened,” said Board member Bill Crosby.

This might not be the right year, said board member Anne Gruner, but “at what time do we say, ‘enough is enough.’”

Jim Turner said income is not rising commensurate with increasing tax burdens. “All I know is this can’t continue,” said Turner.

The Board of Supervisors advertised budget calls for a four-cent tax hike to real estate taxes.

THE BOARD OF SUPERVISORS can adopt a tax rate that is lower, but not higher, than what was advertised at its board meeting Tuesday, March 1.

Each penny on the real estate tax rate provides $23 million in revenue. The Fairfax County Board of Supervisors voted for a four-cent tax rate increase, advertising a tax rate of $1.13 per $100 of assessed value.

But after 150 minutes of debate last Wednesday, April 6, 2016, which followed 90 minutes of committee discussion, the McLean Citizens Association concluded by recommending a three-cent compromise.

“We argued for about an hour and a half and we came up with a compromise of three cents,” said Dale Stein, chair of MCA’s Budget and Taxation Committee who co-authored the draft of MCA’s budget resolution.

“We want to be responsible in terms of needs of the county.”

Sally Horn, past president of MCA, said she thinks it’s a “reasonable compromise.”

“We want to be responsible in terms of needs in the county,” said Horn.

“This is a reasonable approach for this particular year,” she said. “It’s not only schools, it’s parkland, it’s libraries, it’s human needs.”

“I think the three-cent increase is important,” said Glenn Harris, vice president. “I think if we go on record against it, it will have a negative impact on quality of life in Fairfax County.”

“THE QUALITY of life in our community depends to a great extent on the services which Fairfax County provides -- education for our children, public safety, parks, libraries, among others -- and the costs of providing and improving those services continue to rise,” according to the resolution, “now therefore be it resolved that the McLean Citizens Association commends the Fairfax County Board of Supervisors for their efforts to identify and fund budget priorities, with increasing focus on education and public safety.”

Jeff Barnett, MCA president, testified before the Board of Supervisors the next day.

With its resolution, MCA urged the Board of Supervisors to look at “other opportunities for revenue improvement.”

“Other [possible] opportunities for revenue improvement: … higher hotel occupancy taxes paid by hotel patrons, a higher cigarette tax consistent with the practice of surrounding localities, an admissions tax to places of amusement or entertainment, the possibility of a meals tax, and a re-evaluation of permit and user fees, set consistently to fully recover costs.”

Possible measures included, “higher hotel occupancy taxes paid by hotel patrons, a higher cigarette tax consistent with the practice of surrounding localities, an admissions tax to places of amusement or entertainment, the possibility of a meals tax, and a reevaluation of permit and user fees, set consistently to fully recover costs,” according to MCA’s resolution.

“So we get to share the fun with others,” said Stein, during the MCA’s board meeting.

Why does everything need to “be on the back of the real estate tax,” he said.