This is the first Founder’s Day since the passing of Robert E. Simon, Jr. 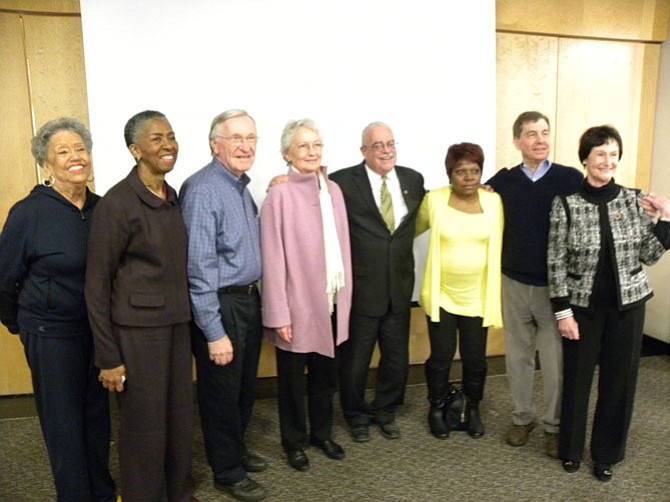 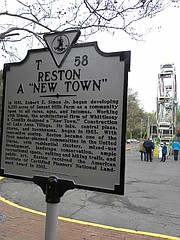 A 50-foot Ferris wheel gives a view from the top during Founder’s Day in Reston on Saturday, April 9. 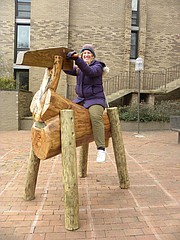 Barbara Cowan, of Reston, gets on the wooden horse sculpture created by artist Marco Rando, who used to play on the original concrete horse sculpture by Gonzalo Fonseca that was at Lake Anne Plaza many years ago.

Joan Kelly’s work “Favorite Walk” shows the sights and scenes of Reston. Kelly is Reston Art Gallery and Studios’ featured artist for the month and is participating in Founder’s Day celebrations.

They remembered his joyfulness and playfulness. But most of all, officials, speakers and friends remembered Robert E. Simon, Jr.’s enduring vision during the opening remarks of the 13th Founder’s Day on Saturday, April 9.

Cold, rain and snow necessitated delays and cancellations of some of the events but people filled the Reston Community Center’s Jo Ann Rose Gallery.

Following a presentation by the South Lakes High School Honor Guard and a performance of “God Bless America” by Beverly Cosham, Ellen Graves of the Reston Association talked about Simon’s life legacy and “unbelievable goals for Reston,” particularly his vision of an inclusive community.

Board of Supervisors Chairman Sharon Bulova said that the principles of inclusion espoused by Simon have spread to all of Fairfax County. “Bob’s vision was for people to live in harmony together,” she said. “And I think of Fairfax County as a place that celebrates its diversity,” not that everything is always perfect, she said.

U.S. Rep. Gerry Connolly (D-11) , said that Simon was always thinking about tomorrow. He said that the story of Reston is the story of the “power of an idea, of principles.”

Reston was revolutionary when it was founded in 1964 but Simon’s vision of a mixed-use, plaza-centered and walkable community was almost clairvoyant, as many new construction and land development plans in Fairfax County call for such a design today.

Last December, the county broke ground on the Laurel Hill Adaptive Reuse Area, a mixed-use village with residential, retail and community space in Lorton. In Fairfax City, developers plan to build similar spaces on the Paul VI Catholic High School when it vacates the property in 2020.

“To put the commercial and the retail together with the residential -- that is state-of-the-art today,” said Bulova. “It’s just turned out to be the best way to develop and the best way to provide living choices for people.”

“Open Space. Today, Tomorrow, Forever” was emblazoned on a T-shirt an audience member wore. Graves said that maintaining Reston’s open space is a major concern of the community.

In March, the owners of the Reston National Golf Course notified Rescue Reston, which has been fighting efforts to develop the property into housing units, that it will not pursue its appeal to the Virginia Supreme Court after the Fairfax County Circuit Court ruled in November 2015 that any development must go through the usual zoning process.

Although Simon was a big promoter of density because he wanted each community to be connected, “Open space was Bob,” said Graves.

“I know there’s a lot of growth, but Bob wanted us all to be here together,” said Hunter Mill District Supervisor Cathy Hudgins. She spoke about finding a balance and preserving the open space and building niches in the community.

Hudgins also hopes to come up with other things that can be done since the Lake Anne revitalization project fell through in December.

“The Plaza’s doing a great job right now. There are lots of exciting things,” she said. But the big job now is to find some way to continue to help spur growth till “we’re ready to bring the development side of that back,” said Hudgins.

Charles Veatch, of the Reston Historic Trust and Museum, said that he is confident that as long as the fabric of community is maintained Reston will endure: “It takes the community sticking together and working together and taking care of things as we always have done.”

“Bob is not physically with us,” said Del. Ken Plum (D-36), “but his ideas, his leadership are still with us.”