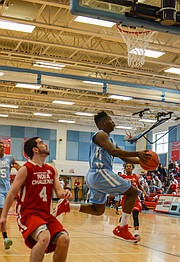 Once the action started, however, the T.C. Williams guard settled in nicely.

James and T.C. Williams teammate Jordan Jones combined to score 30 points for the Fairfax South All-Stars, which lost to the Prince William All-Stars 110-107 on April 10 at Marshall High School.

James, who said he will likely play football in college, scored 14 points on 6-for-14 shooting and grabbed five rebounds. He averaged 18 points per game during the season and earned first-team All-Conference 7 and second team All-6A North region honors.

“During warmups it was kind of overwhelming,” James said about the media attention surrounding the event, which was broadcast live, “but as soon as the game started you just block it out [and] focus on the game.”

Jones finished with 16 points, seven rebounds and three steals. He shot 6-for-16 from the field, including 4-for-9 from 3-point range. Jones, who said he will likely play basketball at a community college next year, averaged 16 points during the season and was a second-team all-conference selection.

“It was great,” Djonkam said. “Every kid on the court I love. I grew up with half the kids on the court. ... [It was my] last time playing with the kids. It was great. I loved it.”

Djonkam shot 6-for-12 from the floor, and made one of his two 3-point attempts.

“I’ve been working on that a lot,” Djonkam said about shooting 3-pointers. “When I came out today, I was like, ‘I’m going to show them what I worked on.’” 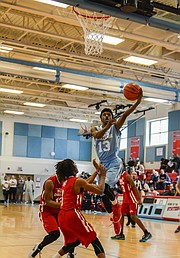