Arlington: ‘Nice Work If You Can Get It’
Votes

Arlington: ‘Nice Work If You Can Get It’

The Arlington Players present prohibition-era musical with music by Gershwin. 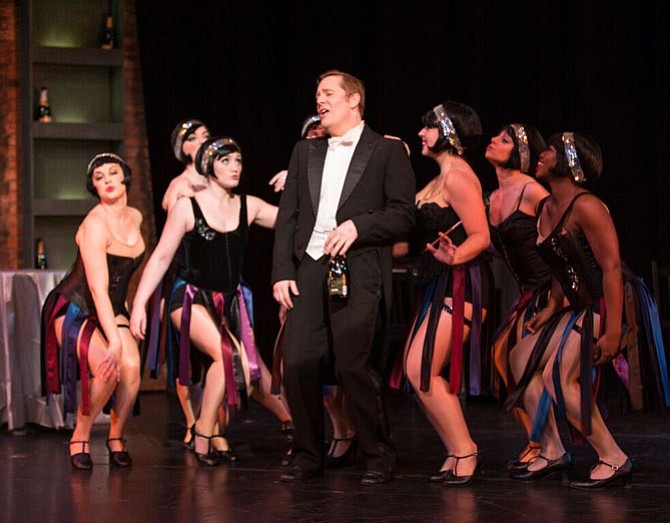 The Arlington Players is staging "Nice Work If You Can Get It" from April 8-23 at the Thomas Jefferson Community Theatre in Arlington. Photo Contributed

The Arlington Players (TAP) is staging "Nice Work If You Can Get It" now through April 23 at the Thomas Jefferson Community Theatre in Arlington. Even though the show was produced on Broadway in 2012 for the first time starring Matthew Broderick and Kelli O'Hara, it has a rather old Broadway aura — with music and lyrics by George and Ira Gershwin. The book was written by Joe DiPietro, and based on material by Guy Bolton and P. G. Wodehouse. Some of its iconic tunes include "Someone to Watch Over Me," "Fascinating Rhythm," and "I've Got a Crush on You."

Set in 1927 during Prohibition, the musical harkens back to the Jazz Age with singing and dancing to the Charleston, Black Bottom, Varsity Drag, a Busby Berkeley bubble number, and tap dancing.

"It's high energy and lots of fun," said producer Barbara Esquibel. "It's all Gershwin songs, tap dancing, all sorts of good things. We auditioned 2 1/2 months ago, we had 75 audition, and a cast of 22 members. We have a great talent pool and I think we came up with a really great group. They've been rehearsing for eight weeks and for the last five weeks, we've been working on the technical aspects."

She said her job as producer is: "to work with the designers, to make sure that the sets and costumes are moving forward; to make sure my production team stays on budget. I'm a liaison between this production and the board," she said.

At a "Talk Back" session after last Sunday's matinee, director and choreographer John K. Monnett said of his cast: "There's a spectrum of skill levels that came in; they've worked really hard for the past eight weeks. They're a tremendous group of people. It's my goal to make everyone look as good as they can."

He said although the show was written in 2012, its based on some routines that were written in the 1930s. "It's got all this great Gershwin music, but it was written 80 years after a lot of this happened .... it's not meant at all to be a political commentary; it's meant to be funny... I think a lot of these issues are still relevant today."

Monnett said the challenge was pulling all of the elements together. "A week ago yesterday was the first time the cast used the set — it's a big set," he said. "Choreographing the scene changes, there was a whole, another show happening. The challenge was getting that smooth and having the actors get comfortable with it."

Cookie McGee, who is disguised as a butler played by Jack Stein, added: "It's a big dance musical. My experience is you've got to get the music and dancing in place. We spent a lot of time running scenes, and to me, one of the biggest challenges was getting the pacing down."

In one of the scenes with dancing girls and a bathtub, the ladies' costumes are adorned with bubbles. "It was my homage to the Busby Berkeley musical — the bubbles," added Monnett who worked with designers to come up with the result.

To prepare for his role as Sen. Max Evergreen, actor James T. Pearson said: "My grandmother was a flapper; my grandfather was a dapper man. I went to my pictures. I remember their stories," he said.

"For me, the biggest challenge and the biggest joy, was everyone has been working hard for nine weeks; they've been serious and diligent and a lot of fun and friendly," he said. "Over 120 people had their hearts, hands and minds in it. This took brains, heart, and courage to do."

Male lead Jimmy Winter, played by Christopher Smith, said the biggest challenge was the endurance. "It was all about making sure that the pacing and the energy was there. Making sure as I walk on, that the character has the same amount of energy throughout the show," he said.

Maureen R. Goldman played the lead role of Billie Bendix, and although she is a natural blonde, she wore a brown wig for the role. "Once I got in the costume and the wig, you feel her," she said in preparing for the role. "I spent a lot of time talking about what Billie must have gone through in her childhood. We were able to create a back story," she added.

Goldman said she has taken a lot of dance classes but has never been an actual dancer so that was a challenge. "Through John's choreography, for anyone who's ever danced on stage, it's a joy to do," she said. "This team has made me feel like a dancer, and that is such a gift."