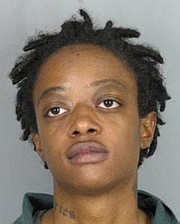 Fairfax County Police have charged Jessica R. Deneal-Whalen, 27, of Alexandria with second-degree murder of 51-year-old Raymond A. White, of no fixed address.

Deneal-Whalen entered the South County Government Center mid-afternoon on April 25 and reported there was a dead man in her apartment on the 5300 block of Bedford Terrace.

Officers responded to the Government Center and then went to the apartment, where they found White with apparent upper body trauma. The Chief Medical Examiner’s Office is still determining the official cause and manner of death, but police said White’s injuries appeared to be from strangulation.

Deneal-Whalen was initially held for questioning because police believed she had a relationship with White. After an investigation that lasted all night, police said they determined the two were at the apartment together when the Deneal-Whalen assaulted White after becoming upset.