From Iran to Mount Vernon
Votes

From Iran to Mount Vernon

Mount Vernon resident Dr. Khosrow Matini’s autobiography, “Fortunate Plastic Surgeon: An Autobiography and My View About the United States,” weaves his journey from a youth in the often volatile country of Iran to a plastic surgeon in the United States. 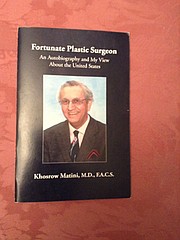 Born at home, Matini entered the world amid an armed invasion of Iran. He grew up with his mother and father, and his two older brothers and younger sister in addition to a host of other relatives. “Every night my entire family sat in the same room to use one kerosene lamp and read by the dim light,” Matini said.

He remembers climbing up the mountains in northern Tehran with his cousins and brothers.

When he was 4 years old, he caught typhoid fever, an infection of the small intestine. While Matini was fortunate enough to survive, one of the muscles of the inner aspect of his left eye ruptured. He became cross-eyed as a result. He refused to go to middle school until his mother got him an operation to fix his eye because of the threat of teasing from his peers. Following the surgery, he went on to attend and graduate from Alborz High School, the same school where his older brother was a teacher.

One day, his older brother pulled him aside and told him the harsh truth concerning his future: that their parents could not afford to send him abroad to America or Europe for an education like some of his cousins.

“When I started 12th grade, I remember my brother calling me into his room. He said that a good education could be had in Iran if I worked hard but it was very competitive because there were very few universities,” he said.

By studying 16 hours a day during the summer following his senior year, Matini was one of 81 applicants accepted to the medical school at Meshed University.

He decided to go to the United States to further his education. He did an internship at Providence Hospital before going on to do his first year residency at the Jewish Hospital Medical Center. He completed his second year residency at the University of Louisville where he gained practical experience in a variety of general surgeries.

He decided to pursue plastic surgery because it would allow him to continue to perform complex surgeries. Once again, he was able surpass the other 68 applicants applying to George Washington University residency program.

With 36 years in the medical field, Matini has been a pioneering force in the local medical community, which he discusses in the later chapters of his book.

Matini was the first to perform a muscle flap reconstruction surgery in the Washington metro area. In 1980, a 16-year-old female patient fell and broke her kneecap. She received surgery. The orthopedic surgeon found that the skin around her kneecap was dead after he removed the cast.

He performed the procedure with success and was able to save the patient’s leg.

Not only is Matini a pioneer in the local medical community, but he is also a champion for the wider Mount Vernon community.

He was instrumental in keeping the Mount Vernon INOVA hospital open.

In 2002, when INOVA proposed closing down the hospital, Matini sent letters to every doctor’s office in the Mount Vernon community for patients to sign to say they were against closing the hospital.

He also contacted the local media, The Washington Post and Mount Vernon Gazette, and told them about the potential closing of the hospital.

“I also contacted Mr. Gerry Hyland, the Mount Vernon supervisor on the Fairfax County Board of Supervisors and explained the situation to him. He was skeptical until I showed him the evidence.”

Hyland arranged for Matini to meet with former Virginia congressional representative Herbert Harris Jr., and former Mount Vernon Supervisor Warren Cikins. Matini was named to a committee to investigate the problems at Mount Vernon INOVA Hospital and formulate a solution.

Not only does the book discuss Matini’s progress and achievements in his personal and professional life, but it also gives readers a taste of his perspective on American politics and culture.

“I have seen three young high school students with paralysis from the neck down as a result of playing American football. Let players play the same game but the minute the defense touches an offensive player, stop the game. This would prevent bad injuries to players …” he said.

Now that he is retired, Matini enjoys painting and learning to play the piano.

He and his wife still reside in the home he had built in Mount Vernon nearly 31 years ago.

Order the book by sending a check payable to: