Waters Field was the center of attention on Saturday, August 6th, for the 21st Annual Northern Virginia Wiffle Ball World Series [NVWWS]. The event, sponsored by Vienna Youth Inc., the Greater Vienna Babe Ruth League, and the Joe Cassella Foundation, looked to continue the legacy of Brian Bedell, the Vienna native to whom this tournament is dedicated. 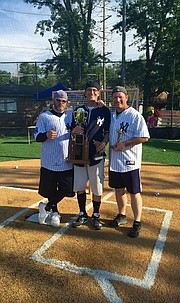 Forty-Eight teams, ranging from rising seventh graders to forty and older, made their way to Waters Field at 8 a.m., stepping onto the hallowed competition grounds known as “The Field of Dreams.” The opening ceremonies began with an introduction speech by Jodi Leigh of The Leigh Agency, who has been organizing the event for the last five years, and guest speakers, including: Todd Casey from the VYI Board of Directors, Bill Scopa from Greater Vienna Babe Ruth, Frank Cassella from the Joe Cassella Foundation, as well as Past Chairman of the 2-Young Foundation and long time tourney-participant, Michael Ryan. Abby Miller, a Loudoun local who is one of the nation’s leading advocates for childhood cancer awareness, performed the National Anthem. Distinguished guests included Vienna Town Council members Carey Sienicki, Linda Jane Colbert, and Howard Springsteen.

The NVWWS featured a four-tiered bracket, spanning four divisions of play, including a Kid’s League, Minors, Majors, and Masters respectively, each crowing their own distinct champion before facing off for the overall title. Additional activities throughout the sunny afternoon included moon bounces, face painting, various games, snow cones and even a silent auction, which provided entertainment for all ages, with food and drink catered by the Vienna Inn keeping everyone well nourished.

The Van Metre Road to the Final Four ended with Vienna American as the Kids League Champion, Redwood Wiffle Jam as the Minors League Champion, Fast Plastic as the Majors League Champion, and the NOVA Yankees as Masters League Champions. Following a brief rain delay, the overall championship tournament concluded in grand fashion, for the first time ever, the winner was determined via the extra-innings home run derby. The NOVA Yankees, a long-time Masters League entry and underdog in the finals, squared off against Fast Plastic, three time champions of the NVWWS, with the NOVA Yankees hitting a walk-off homerun to hoist the Bedell/Cassella Cup. Long-time player and behind-the-scenes creative designer for the NVWWS, Frank Bilotto, was formally inducted into the NVWWS Hall of Fame this year for his continued dedication to the annual tournament.

The Joe Cassella Foundation is sincerely thankful for the incredible turnout for this year’s tournament, and equally delighted with the large number of teams and sponsors that contributed to the success of the fundraiser.

The Joe Cassella Foundation is based in Leesburg, VA and its mission is to provide financial assistance for medical expenses to families of children who are ill in the Washington D.C. Metro area. This organization was born from the loss of an amazing man and inspired by the overwhelming support his family received throughout their journey. To find out more, go towww.JoeCassellaFoundation.org or visit us on Facebook!