Despite a few fumbles. 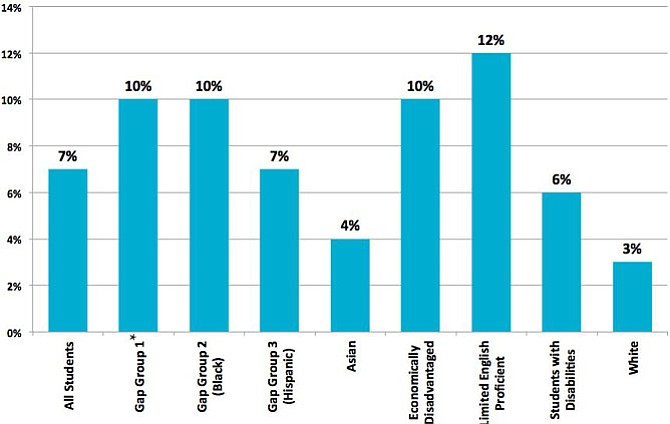 The Standards of Learning (SOL) test results are in, and for the most part, Alexandria City Public Schools has passed. The Virginia Department of Education released the data for the testing results in Alexandria over three years, showing a steady increase in both reading and science categories.

“When you’re looking at three-year results, there’s variability, but there’s momentum. If we continue to sustain our focus, we will continue to see progress.”

“This year we’ve made progress in closing those gaps,” said Crawley. “The general feeling is one of optimism. When you’re looking at three-year results, there’s variability, but there’s momentum. If we continue to sustain our focus, we will continue to see progress.”

Several schools have shown substantial improvements. Aside slight exceptions in one year for science and writing, Jefferson-Houston improved steadily in every category over the last three years. The school’s math scores jumped from 40 percent in 2014 to 58 percent in 2015, then again to 63 percent in 2016.

A few problems remain. Across several schools that saw dramatic score increases in 2015 there were one percent decreases in 2016, which Crawley said was common balancing. Throughout the school district, scores in “writing” saw a minor but steady decline over the last two years, from 71 percent in 2014 to 69 percent in 2016. Crawley said this was part of a national trend in declining writing scores. However, Crawley said after these results that the schools will take another look at how writing is taught in the schools.

“This is not a quick fix,” said Crawley. “It takes time, but I think we’re on the right path.”

While most schools saw fluctuations or increases across the five categories, T.C. Williams High School had an overall three-year decline in every category except science. Crawley said the data is fresh and the schools still need to do an item-by-item analysis of the assessment with the individual school leadership teams. Currently, principals from the Alexandria schools are planning for the upcoming year with their school leadership teams. Crawley said these groups will look at the testing data before sending their plans to the central office for approval.

At T.C. Williams, Principal Jesse Dingle made it clear that math is the school’s priority. T.C. Williams had the highest scores in writing from throughout the school district and ranked average for the other categories, but fell to 59 percent for math in 2016, a seven percentage point drop from 2015.

Our biggest focus is on math,” said Dr. Dingle. “We had a drop [in math] this year. Sometimes, when there’s big gains, you see a drop. That’s what happened in math, and when you look across the state that’s common.”

Dingle said the school’s leadership team is currently looking at the data and looking for ways to incorporate math across the curriculum.

“We always want to make sure students are being successful,” said Dingle, “and we’re continuing to look at the data to see what is successful and what is not. [T.C. Williams] is about continual improvement.”