Local non-profit offers friendship, care and fun to those with developmental differences. 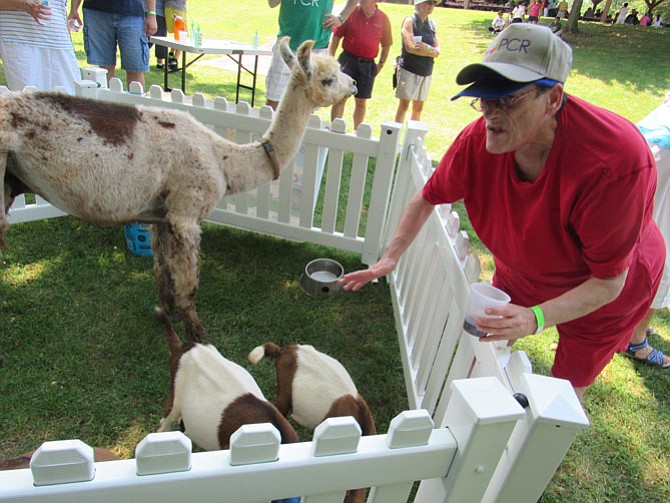 As the sun poured from a mid-summer sky, the aroma of beef gently roasting on a grill filled the air along with the squeals of children petting fuzzy fauna such as rabbits, hedgehogs and mini alpacas. Nearly 400 people had gathered at Smokey Glen Farm to celebrate the memory of long-time Potomac resident Gen Ryan, a co-founder of Potomac Community Resources, Inc. (PCR). This nonprofit organization promotes the inclusion of those with developmental differences into the life of the community.

The family of Gen Ryan, a long-time Potomac resident and a co-founder of Potomac Community Resources, Inc. (PCR), honor her memory at a barbeque at Smokey Glen Farm.

“I love that [these members] can experience some of the same kinds of things that others their age can do. And it’s a nice way to see the smiles on their faces.”

Laura Ryan and Father Bill Byrne, pastor of Our Lady of Mercy Catholic Church and a member of the Potomac Community Resources, Inc. Board of Directors, attend a barbeque to support the organization.

“The barbeque brought together people with and without developmental differences,” said Stephen F. Riley, PCR’s executive director. “The charge Gen gave me at the last BBQ she attended before she died was make it nice and make it affordable for our members. We do that because we want to honor Gen’s charge.”

Founded in 1994 by a small group of families at Potomac’s Our Lady of Mercy Catholic Parish and supported by a team of staff, volunteers and donors, PCR is designed to enable people living with a disability (the organization’s officials prefer the term developmental differences), including the more than 8,000 people in Montgomery County, to be integrated fully into community life.

Members are offered programs which help them experience life and interact with others without disabilities. This award-winning organization provides 35 therapeutic, recreational, social and respite care programs for teens and adults with intellectual and developmental differences.

“We’re a tiny organization, but this is an example of people in Potomac seeing a need and taking action,” said Riley. “Our roots in Potomac are deep.”

One of the founding parents was Larry Ryan, whose daughter Laura is an active PCR member who attends yoga classes and movie and pizza night activities. “Some of her best friends are members of PCR,” said Ryan, widower of Gen Ryan, PCR co-founder for whom the annual barbeque is named. “It is comforting to me that she has dear friends who she can spend time with.”

Cathy Pope remembers the day she took her 25-year-old daughter, Heather Dressman, to PCR’s Tricia Sullivan Respite Care Program. She had hoped her search for an outlet for her daughter would end with this program, where members spend an afternoon participating in activities running the gamut from art and music to pet therapy and massage therapy. The day didn’t go as planned.

“Heather started smacking her head with her hand when we got there,” said Pope, who was reduced to tears at this difficult beginning. “I cried and thought, ‘Now I don’t have another organization for her.’ There are very few that accept people with special needs.”

“Everyone there was welcoming and very skilled at taking care of the people. eather is not toilet trained, but the counselors don’t mind changing her,” said Pope. “This gives Heather an opportunity to enjoy fun things that everyone else can enjoy. It also gives me a chance to run some errands.”

PCR volunteers such as Molly Shriver of Potomac who became involved with the group through her school, Connelly School of the Holy Child, say they gain as much from the PCR participants as they give.

“The members are always so positive and they bring out the best of the Holy Child students,” said Shriver, who was a member of the Holy Child class of 2016 and PCR' s Outstanding Youth Volunteer 2016. “They’re always in such a great mood, bringing our spirits up.”

Shriver and other Holy Child volunteers host activities such as movie nights, pizza nights and themed dances and parties where PCR members, including those in wheelchairs, can participate fully.

“Since the dance floor is really popular, we try to make sure everyone comes out for at least one song,” said Shriver. “If they are shy or can’t hear or can’t physically move, we try to get them on the dance floor and move their wheelchair back and forth.”

Parents such as Pope say that PCR can be life-altering for their children. “I love that they can experience some of the same kinds of things that others their age can do,” she said. “And it’s a nice way to see the smiles on their faces.”

To join, donate, volunteer or get more information, visit http://pcr-inc.org/