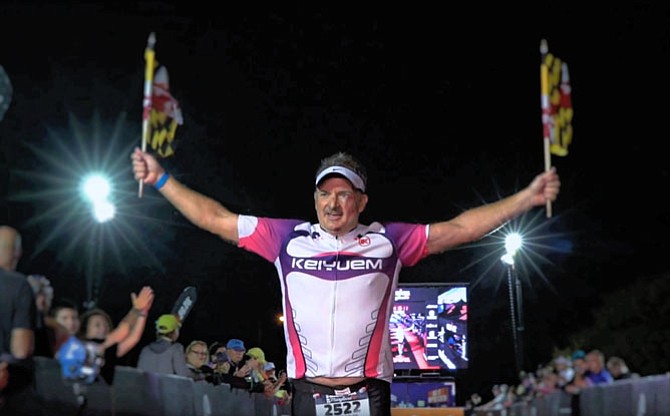 Coming up to the “gauntlet” home stretch, Bill Vitaletti of Springfield grabbed a pair of Maryland state flags and unfurled them as he ran across the finish of his first Ironman triathlon. 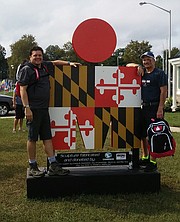 Left, Bill Vitaletti and his Ironman “sherpa” and training partner Susan Calhoun (center) pose with the race director of the October Ironman Maryland.

Bill Vitaletti of Springfield had fractured his jaw in three places, broken a bone in his eye socket, chipped a tooth and cracked two other teeth that would eventually have to be pulled.

But he didn’t know any of that at the time. What he knew was he still had at least 20 miles left to bike and 26.2 miles to run before completing his first Ironman triathlon.

“I didn’t want to let myself down,” Vitaletti said. “I’d been working for so long. To stop, felt like admitting defeat. I didn’t want that. I have family, different people going through hard times. I wanted to show them, you can take bumps and bruises along the way.”

That was in Cambridge, Md. in October this year. More than three years ago, at age 57, Vitaletti left his job at CACI. A workaholic, 35 pounds overweight, he said he wanted to do something different, “something for me this time.”

VITALETTI was once an All-American backstroker for the State University of New York at Oneonta. He got back in the pool at South Run RECenter. His neighbor convinced him to take up running. When he went too hard too fast and injured himself, the neighbor encouraged him to get on the stationary bike to recover.

While on the bike at South Run, Vitaletti began meeting and talking with people. He was motivated to sign up for road races, including the George Washington Parkway Classic and Cherry Blossom ten-milers. He built up to the Marine Corps Marathon, which he ran four times.

Then someone suggested Vitaletti try out triathlon, as he was working on all three disciplines anyway. A friend from South Run and triathlon veteran Frank Castro helped him work out a plan for working up to triathlon’s toughest race: the Ironman.

Starting from the shortest distance, the sprint, moving up to Olympic, then half-Ironman and on to full Ironman (a consecutive 2.4-mile swim, 112-mile bike and 26.2-mile run), “It all clicked,” Vitaletti said.

“My first goal was fitness,” he added. “But you hear this saying, you work so hard and train, get into such good shape, that the event itself becomes the victory lap.”

In 2015, Vitaletti participated in his first half-Ironman. He wasn’t out to beat anyone, just finish. This year at a half-Ironman in May, he wanted to go faster.

Helping him get faster was an informal training group that formed at South Run, novices of various ages. Susan Calhoun of Fairfax Station is one of them.

“Bill is very determined,” she said, “it’s very inspirational to watch him put so much effort into something.”

“He just has so much knowledge, he’s very good at giving some advice, a lot of people come up to him,” Calhoun added.

Together, the group signed up to do triathlons at Quantico and in Washington, D.C.

For his Ironman, Calhoun and Castro were his “sherpas,” helping sort out gear and eating logistics for him.

Vitaletti was going strong until around the 80-mile mark on the bike ride: He glanced over his shoulder to let some riders pass him and didn’t see the pothole coming up in front. The front tire blew completely and Vitaletti was thrown from the bike, face first down to the pavement.

A support vehicle saw the accident and came to render aid immediately. They called an ambulance and began doing repairs on his bicycle as well.

Vitaletti said he remembers being “stunned” by the crash, but then asking the paramedics who strapped him to a gurney “What are we doing here?”

THE MEDICS recommended Vitaletti go to a hospital for full diagnostics, and it occurred to him that meant not finishing the race. Not getting to see Castro, Calhoun, or his brother- and sister-in-law who had driving up to Cambridge from the Washington, D.C. area to cheer for him at the finish line.

“What do I have? What are my vitals?” Vitaletti asked the medics. Upon hearing that those were surprisingly stable, he asked, “How’s my bike?”

The repair team had gotten Vitaletti’s bike rideable again, and with a makeshift chin-sling holding his jaw in place, he took off to finish the race.

“I thought it was crazy, conditions were so bad, runners wading through water,” Calhoun said. “When I saw him, I was up to my knees. Just standing around, I was miserable. To think they were doing this, and he didn’t know how bad he looked.”

Fighting off considerable pain the rest of the way, Vitaletti drew strength and motivation from his sherpas at checkpoints and other racers, including a man who asked to pray with him for at least 15 minutes of running.

Coming up to the “gauntlet” home stretch, Vitaletti grabbed a pair of Maryland state flags and unfurled them as he ran across the finish.

“I wanted to finish with joy,” he said. “I was overcome with joy, not just that I finished, but it was a climax of all that work. I was so hyped up to do this.”

Calhoun is now signed up for her first half-marathon. She’ll be training with Vitaletti and the group as he prepares for his second Ironman next year in Lake Placid, N. Y.

“With a lot of determination, and a little bit of crazy,” Calhoun said, “anything’s possible.”