A ministry to the faithful and the community beyond. 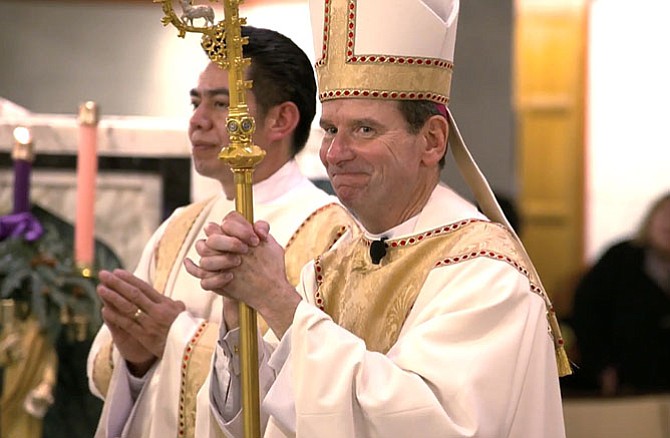 The Most Rev. Michael Burbidge is the new bishop of the Catholic Diocese of Arlington. Photo Contributed 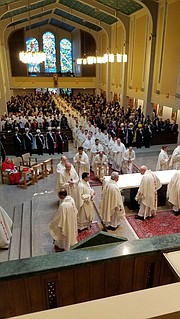 Mass of Installation was held Dec. 6 at the Cathedral of Saint Thomas More in Arlington.

The Most Rev. Michael Burbidge assumed full authority last week as the new bishop of the Catholic Diocese of Arlington. He succeeds the Most Rev. Paul Loverde, who retired after 17 years as bishop. Burbidge begins his new ministry with a commitment both to conservatism and bridge building.

Early in his homily at his Mass of Installation, held Dec. 6, he said people live in “unsettling times.” He called for renewed public engagement of several issues that have been hallmarks of the culture war. These include protection of the unborn, religious freedom, and the sanctity of marriage. He warned that Catholics’ faithfulness on such issues might result in ostracism, acknowledging society’s deep and persistent divisions.

Equally, the Mass conveyed a yearning to unite and serve across boundaries. Burbidge preached on having a disposition of thankfulness and sharing God’s mercy. People of various ethnicities read Scripture, prayed, and sang in as many as six different languages, underscoring the diocese’s repeated commitment to promote cultural diversity. Burbidge stood to greet ecumenical and interfaith clergy. Among them, Rabbi Gerry Serotta is the executive director of the Interfaith Conference of Metropolitan Washington, which represents 11 different faith traditions.

Before reading aloud the papal letter directing Burbidge’s transfer, the Most Rev. Christophe Pierre framed the bishop’s mandate as being constructive for the whole society. Pierre is the Apostolic Nuncio, or Pope Francis’ personal representative in the U.S.

“An Apostle must make an effort to be courteous, serene, enthusiastic, and joyful, a person who transmits joy everywhere he goes,” he said, quoting Francis. “We pray … for your faithful episcopal ministry to this beautiful family of faith, and to the community beyond.”

Francis transferred Burbidge from the Diocese of Raleigh, N..C, where Burbidge served as bishop for 10 years. Burbidge’s new diocese contains twice as many registered Catholics, who number about half a million; it abuts the seat of American government; and many of its parishioners are prominent government leaders. For these reasons, the transfer represents “a very strong vote of confidence in his leadership abilities,” said the Rev. Thomas Ferguson, the diocese’s second ranking clergyman.

Francis wrote to Burbidge in his letter of appointment, “[You] have clearly shown that you are endowed with many outstanding episcopal qualities and virtues.”

IN AN INTERVIEW Dec 5, Burbidge said he will not pursue any specific agenda too quickly.

“You cannot implement a diocesan plan or mission statement until you take the time to listen and learn. So one of the first things I’m doing upon being installed is, I’ll be celebrating seven or eight Masses around the diocese, and then I’ll have the opportunity to be with the priests and the lay faithful. … That’s my first goal: just get out, listen and learn.”

Nevertheless, he expounded repeatedly his general commitment to break down walls.

When asked how he will promote unity and charity in society following a divisive election season, he replied: “We’ll continue to preach the gospel — right! — reminding us that we are all created in God’s image and likeness. We are all united as brothers and sisters. We’re part of the human family and share the common responsibility to build up the common good. And we can only do that when we respect and listen to one another. Even when we disagree, even when we have different perspectives, that we do not label, we do not dismiss one another, but truly listen and respectfully engage each other.”

“CVNC seeks to influence legislation at both the state and national levels,” according to the web site. “Beginning in 2008 Catholics in North Carolina who joined CVNC received email alerts from the bishops requesting they contact legislators to support or oppose various pieces of legislation.”

Burbidge said he will continue in his new position to engage the various levels of secular governance.

“Yes, as a bishop, I’m mandated to. I’m mandated to bring the gospel into the public arena. We’re very blessed here in this diocese where we have a Virginia Catholic Conference that assists us in that process. And part of that Conference is working with elected officials … not always out front, many times privately, personally, where you can really have a true dialogue. So I will continue to do that, but always respectfully.”

Ferguson assures that Burbidge will be conservative in his values and priorities, as was his predecessor. But he cautions that conservatism in a Catholic sense does not necessarily mean the same thing as conservatism in a partisan sense.

“[I]t’s very hard to equate the term ‘conservative’ as it’s used in the Church with the way it’s used in the political process in this country,” he said. Conservative Catholicism “means really to be committed to the idea that we have a tradition that’s rooted in the gospel of Jesus Christ.”

Against that reference point, the Church always considers its teachings to be conservative, regardless of where they fall on the partisan spectrum.

“[S]ometimes the positions that we take in the public forum are going to align ourselves with people who are known politically as conservative. But at other times the positions that we take to protect and promote human life and dignity will align us with people who are sometimes known as liberal in the public forum,” said Ferguson.

For example, Catholic Voice NC supported an amendment to the N.C. state constitution that would have banned same-sex nuptials. It also supported the DREAM Act, bipartisan legislation to provide a pathway to citizenship for undocumented immigrant youth. Similarly, the Virginia Catholic Conference supported legislation to restrict access to abortions. It also opposed allowing concealed handguns on school property.

BURBIDGE ALSO has experience with ecumenical diplomacy. He served five years as co-chair of the International Catholic-Pentecostal Dialogue, a Vatican-sponsored program to improve relations between the historically estranged Christian traditions.

“It was a wonderful opportunity. I was honored. … What I learned from it is that there is a scholarly approach to the work of ecumenism, where we really have to study and learn, ‘What do you believe? And why do you believe that? And what’s the history of that?’ And so we get to teach each other. … And then what you try to do is you try to find, where is there common ground? What are the things — the statements, the core beliefs, the convictions — that we agree upon? And let’s put them on the table, too, and celebrate them. Now if it’s a true dialogue, you also have to say, ‘And where do we disagree? … What are those things that separate us?’ And then we begin to try to explain that to each other.

“And then every part of the dialogue was always rooted in prayer. We prayed together every single day. And one day the Pentecostals would lead the prayer, and the next day the Catholics would lead the prayer. One time they would take us to a Pentecostal celebration, and we would take them to a Catholic celebration. So you experience each other, how they live and celebrate the faith.

“So I think if you put all those principles together, then any ecumenical dialogue would be fruitful. … And here, I know the work in the Diocese of Arlington — the ecumenical efforts — is very, very strong. So I look forward to continuing that dialogue.”

In any case, Burbidge believes his diocese must engage beyond itself with both principled tradition and charity. The two go hand in hand: “As God’s servants first, we are called to bring the truth and the joy of the Gospel into the public arena, with conviction and, always, in love.”