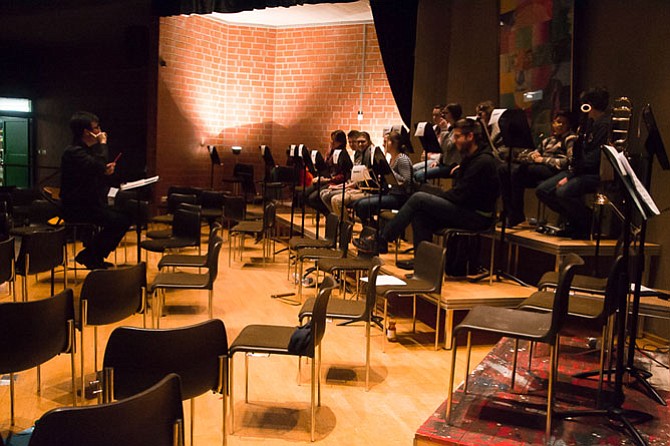 The wind section participating in sectionals. Photos by Caroline Watkins

With violin, viola and bass bows stowed into the overhead compartments of KLM flight 652 on Jan. 15, the McLean High School Philharmonic flew to Europe to participate in the 22nd exchange program with the Detmold, Germany Jugendorchester.

The joint orchestra’s classical selections included Dvorak’s “Symphony No. 4 in G Major,” Beethoven’s “Egmont Overture” and Mendelssohn’s “Violin Concerto in E Minor.” To perfect the performances, the groups rehearsed anywhere from four to nine hours a day, in preparation for the two concerts that capped the week-long visit.

When the musicians weren’t rehearsing, the students enjoyed other activities such as a Nighttime Historic Walking Tour of Detmold, a tour of the Hochschule für Musik (Conservatory for Music), a day trip to Bremen and a night at the Burg Sternberg Castle, where students enjoyed playing Medieval instruments.

In addition to the 32 American musicians and six chaperones that participated in the program, McLean High’s Principal Dr. Ellen Reilly joined the group. “Overall, the experience was wonderful,” Reilly said. “It was great to be a part of this exchange that has been happening for over 20 years. I got to see first hand the friendships that are formed and how everyone benefits from the exchange. The amount of time each student put into the practices was quite impressive. I was quite proud of everyone involved.”

McLean Philharmonic’s teacher and conductor, Starlet Smith, noted: “At one point during our second concert, I was sitting in the audience listening as the German conductor led a piece. While listening to the beautiful, full sound the orchestra was creating, I started to look at individual players and noticed that the students were playing with passion and energy like I'd never seen before. It was a very powerful moment for me to see the impact that the music had on the students, and how everyone's hard work during the week's tireless hours of rehearsal came together for a performance that [both] the audience and student performers could enjoy.”

The exchange not only promotes the unifying power of music, but also exemplifies the benefits of socializing with students from across the globe. Simon Meyer, a five-time German participant in the program, said, “I’m so glad that I can be a part of the exchange program. I’ve already planned to meet some friends in America and some of my American friends are planning on coming back to Germany on future vacations---and that’s a great result of this program.”

After a bittersweet farewell, the American musicians traveled to Amsterdam, where they would spend the remainder of their trip. To the delight of many, McLean Highlanders had a two-day extension in Amsterdam thanks to Winter Storm Jonas. Ms. Smith, speaking for the entire orchestra, concluded the extension “was a blessing in disguise because everyone got to bond over the unforgettable experience for exploring a new city…the days in Amsterdam were a pleasant surprise to everyone.”