Bruins fall to Stonewall Jackson in opening round of regionals. 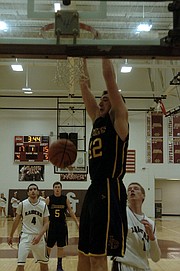 Lake Braddock senior James Butler dunks for two of his 40 points during the Bruins’ 83-76 loss to Stonewall Jackson on Tuesday in the opening round of the 6A North region tournament.

The Lake Braddock boys’ basketball team, facing the win-or-go-home reality of the 6A North region tournament’s opening round Tuesday night, leaned on its 6-foot-8 pillar of hope.

The Bruins, on the road against Conference 8 runner-up Stonewall Jackson, relied heavily on James Butler at the offensive end and many times the senior center delivered.

Butler battled in the paint. He scored with post moves. He dunked. He grabbed offensive rebounds. He hit a fade-away. He buried a 3-pointer. He made 7 of 10 free-throw attempts.

Butler finished with 40 points ­­­ more than half of the Bruins’ offensive production ­­­ but it wasn’t enough as Stonewall Jackson closed the game with a 13-4 run and defeated Lake Braddock 83-76.

Butler, the Conference 7 Player of the Year, made a pair of free throws with 2.4 seconds remaining, getting him to the 40-point mark for the second time this season (he scored 46 against T.C. Williams on Dec. 15). He finished his high school career fighting to keep the Bruins’ season alive.

“If anybody hasn’t watched him play, they’ve missed out on something magical,” Lake Braddock head coach Brian Metress said. “He’s had a magical high school career. We would have liked to have given him one more game. That’s a quality kid who is dedicated to his school and every year got exponentially better. Everybody in the region should be a fan of that guy.”

Butler will continue his basketball career at Navy.

“I don’t think it’s really set in,” Butler said about his high school career coming to a close. “It’s pretty upsetting. We have a great team, great coaching staff. I’m going to miss the heck out of it. The fun times we’ve had playing together. We built connections and chemistry, it’s a process and it’s painful to see that go away. We’ll always have it but for us as seniors, it’s time to step away now.”

Sophomore guard Jordan Burrage-Cobb scored on a putback with 4:11 remaining in the fourth quarter, giving Lake Braddock a 72-70 lead, but Stonewall Jackson responded with an 11-0 run to put the game away. The Bruins went scoreless for nearly 4 minutes before a bucket by senior forward Peyton Bishop cut the Stonewall Jackson lead to 81-74 with 12.8 seconds remaining.

“They were just better down the stretch,” Metress said. “[Stonewall Jackson guard Keaton Simmons] is a big-time player and one of the things about being such a good player is the ball is always in his hands and it’s hard to squeeze it out of his hands. I thought we did a good job in the third quarter but not so good of a job at the end of the game.”

Lake Braddock trailed by eight late in the second quarter before Pelham drained a buzzer-beater from halfcourt, cutting the Bruins’ deficit to 45-40 at halftime.

A 9-0 run gave Lake Braddock a 55-52 lead with 1:45 remaining in the third quarter. A Bishop bucket in the closing seconds of the period gave the Bruins a 61-59 lead entering the fourth quarter.

Lake Braddock started the season with eight straight victories and finished with a 15-9 record. The Bruins entered the Conference 7 tournament as the No. 4 seed and advanced to the semifinals before losing to No. 1 seed West Springfield, 61-59.

“I told them, ‘Great season,’” Metress said. “Fifteen victories in the Patriot District, got yourself to the regional tournament, had a chance on the road to win a game: spectacular.”