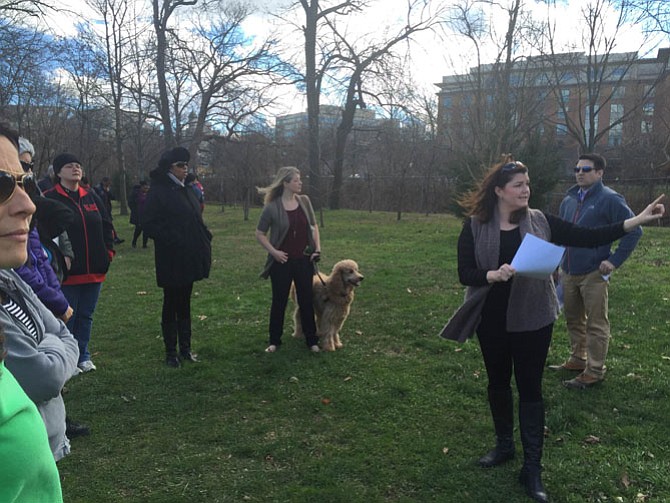 Kristen Gaffney leads one of the local tours. Photo by Vernon Miles. 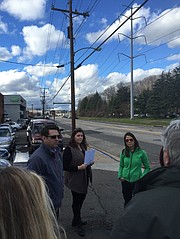 From dog walkers to day laborers, artists to auto shops, there’s much packed into the area around Jennie Dean Park. The area’s small enough in size that the Arlington County Board and representatives of the local civic federation were able to walk the entire perimeter on Jan. 10, but big enough in interest that each board member was accompanied by nearly a dozen local citizens.

One of the guests on the tour was Mike Katrivanos, the owner of Jennie Dean Park’s newest business; New District Brewing Company opened its doors in Shirlington on Jan. 9.

“It was incredible,” said Katrivanos. “We had over 1,200 people come out, and the street came alive. People were very supportive, they drank us out of two of our beers.”

Katrivanos’ family is from the neighborhood, so he said opening a business in the area felt like a homecoming. Katrivanos also said he received a lot of assistance and advice from county staff.

“The county has bent over backwards to help,” said Katrivanos. “They really went to bat for us.”

But for businesses in the Jennie Dean Park area, the popular new brewery is still the exception. The majority of the buildings facing the street along that along Four Mile Run Drive to the north of the park are car repair businesses, many with an assortment of wrecked vehicles adorning the front of their store.

According to Robert Duffy, Arlington’s planning director, those businesses are centered around Four Mile Run Drive because the area is one of the few zoned for light manufacturing.

“This is one of the last areas in Arlington that can serve these kinds of use,” said Duffy.

Duffy referred to the loose zoning in Shirlington as a double edged sword, one that allows businesses like New District Brewing to come in, but one that also makes it very difficult to push out the unsightly storage units and car repair businesses.

“There are a lot of mechanic shops on Four Mile Run, and we’re happy they're here, we just wish it was a little more aesthetically pleasing,” said Kristen Gaffney, a local resident leading one of the tours. “We don’t want the car service to go away, but we want it to be a little more diverse.”

Kimberly Miller, a resident of the Shirlington, said she hoped the county would continue working on beautification of the area and expanding some of the more popular services. 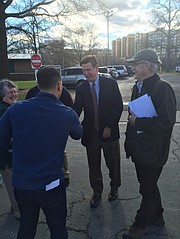 “We need to continue on our strong points, like the Arlington Food Assistance Center, the dog park and the playground,” said Miller.

Miller was among the residents who said they hope to see less auto shops.

The small area around the park means many Arlingtonians have conflicting ideas on priorities. Gaffney pointed out a parking lot outside the Shirlington Dog Park as an example. According to Gaffney, some residents want to see the parking lot expanded, possibly into a parking garage, while others want it converted into stores and a cultural space.

But if there’s one area where all of the local residents agree, it’s that the ART Bus lot currently located on the park needs to leave. The county moved the ART buses to a temporary lot at the park until a new facility was finished in Crystal City

Among those calling for the removal of the buses was local resident and new County Board Chair Libby Garvey.

“We need to organize the density here and we need to get those buses out of here,” said Garvey. “This is going to happen. Those buses are going to go, though maybe not until this fall.”

“Someone put a sign up on the bus lots that said ‘Jennie Dean Park,’” said County Board Member John Vihstadt. “There’s something wrong with that picture, and we’re going to fix it.”

Among the residents who put the meeting together, there was a sense of cautious optimism.

“We need a project manager on this,” said Portia Clark, president of the Nauck Civic Association. “It’s time to get the ball rolling.”

Robin Stombler, a local resident and business owner who has vocally advocated for revitalizing the park, said she was happy to see such a large attendance.

“Overall, we want to preserve the neighborhood diversity and encourage innovation,” said Stombler. “The biggest challenge for us was getting this process moving, and I think this neighborhood walk was successful in that.”

“This plan is about action,” said Duffy. “It’s time to move forward. A formal plan is going to take shape in early February.”

According to Duffy, the scope of the plan will partially be derived from the feedback gathered from the community at walks like the one on Sunday and other community meetings.