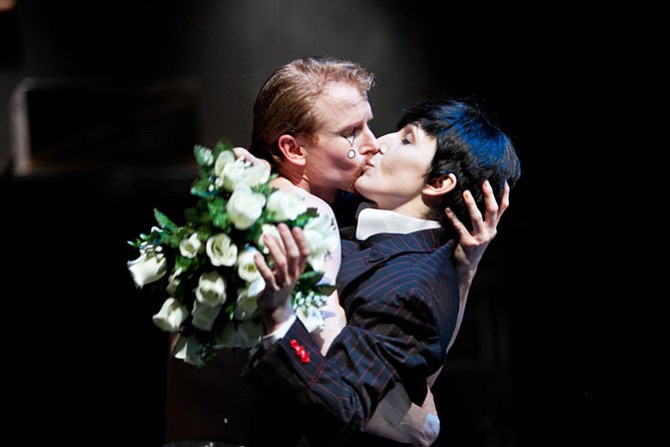 Synetic Theater is presenting "Twelfth Night" from July 13 to Aug. 7. After garnering 11 Helen Hayes Award nominations, Synetic’s 2014 hit is back by popular demand. Set in the Roaring ’20s and inspired by the silent comedy of Buster Keaton and Charlie Chaplin, "Twelfth Night" tells the tale of fraternal twins, Viola and Sebastian, separated in a strange new land. Having survived a shipwreck and believing her brother Sebastian has been lost, Viola falls hopelessly in love with Duke Orsino and disguises herself as a man to enter his services. This production will not have dialogue.

Director Paata Tsikurishvili said as with most Shakespeare plays, the characters are iconic and span a whole range of emotions. "It's also a very short and compact play — very cinematic and keeping with our style," he said. "And this is a play that has everything: it's deeply touching and uproariously funny, with great opportunities for physical comedy."

He said in choosing the setting of the 1920s, he wanted to explore the physical style of silent film and silent comedy to fuse the visual style of the '20s with his contemporary take on Shakespeare's story.

"I think this silent film style is appropriate for what we do, being a 'silent' or wordless show," he said. "What really inspired me was the work of (Charlie) Chaplin and (Buster) Keaton, the two kings of silent comedy.

He added: "Also, the '20s dances were completely and dynamically wild — the Charleston, the Foxtrot, swing dancing — they took us in a completely different direction from anything we've ever done before."

As far as challenges, he said: "As always, it's a challenge to do justice to Shakespeare's words without verbally speaking them, to convey everything that's being said in a non-traditional way and use another theatrical language, so to speak. Incorporating the multimedia aspects to this show was a challenge too, but especially given the play, it was tremendously fun."

He said the biggest challenge for him was the comedy aspect of the show. "Physical comedic timing for me is like a moving target that demands practice and much refinement," he said. "There is always room for improvement where a fraction of a second too short and you undersold the joke, conversely, a second too long and you are hitting the audience over the head with the joke," he said.

As far as audience takeaways, he said: "We often blindly covet the unattainable, in love with the pursuit of love but not actually in love with the object of our desire. Sometimes love is right in front of you even though you might not be ready or able to acknowledge it."

Kathy Gordon plays the role of Olivia, who at first is mourning her brother to the point of obsession and so very bored of Orsino's constant proposals. She said everything changes when she meets Cesario, who is actually Viola in disguise, and Olivia falls head over heals in love with him (her). "Olivia is very impulsive and knows exactly what she wants and will do anything she can to get it," she said.

As far as challenges, she said she spent a lot of time watching black and white movies from the 1920s to get a feel of the movement and acting style as her movements and gestures have to reflect that, she said. "Also, building up my physical stamina for this show has been a challenge," she said. "I am a very fit performer but doing a run on this particular show is very exhausting so I have to constantly remind myself to eat well before hand."

She said she hopes the audience comes out from watching this production feeling happy and light-hearted. "It is a wonderful show to perform in and I hope the audience sees that during the show," she said.

Irina Tsikurishvili plays the role of Viola, one of Shakespeare's greatest heroines. "Strong and vulnerable, tragic and comedic, she really runs the emotional and physical gamut," she said. "As funny as she is though, I think there's also a deep streak of melancholy in her, being in love and not able to reveal her identity and having lost her brother. Getting to do all this — to play such high tragedy and comedy — makes this a dream role."

She said since the play was set in the 1920s, Chaplin's style of comedy was the natural direction they took. "And applying that to Viola — a kind of lost, searching soul — and getting to essentially play The Little Tramp, this was a tremendous thrill," she said. "And the dances — the Cakewalk, the Lindy Hop, the Charleston — was also a very exciting new movement style to explore and perform. It was a lot of fun getting to put our own spin on them."

For audience takeaways, she said: "I hope people have fun, that they feel like they're watching a live-action, a silent comedy. I hope they feel like they've been transported back in time to a place that will be recognizable to them, but that they're now seeing in color ... Most of all, I hope everyone leaves the theater with a smile on their face, which I think they will, especially considering the finale that we have in store for them."

Synetic Theater in Crystal City is showing "Twelfth Night" from July 13 to Aug. 7. Showtimes are Wednesdays through Saturdays at 8 p.m.; Sunday matinees at 2 p.m. Tickets are $20 to $60. Synetic Theater is located at 1800 S Bell St, Arlington, in Crystal City. For more information, visit www.synetictheater.org.