Great Falls: Benefits of Giving Back 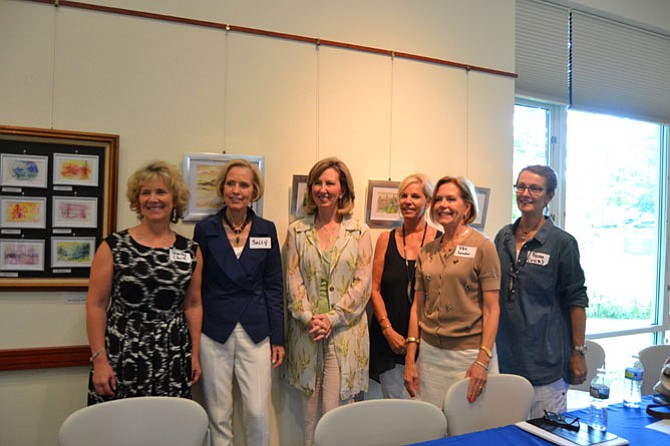 U.S. Rep. Barbara Comstock (R-10) introducing the panelists for the Young Women’s Leadership Program at the Great Falls Library: Students were taught about the benefits of giving back to their communities.

at Leader, the WGB secretary and treasurer, reads a letter from a woman helped by the organization, with Sally Turner (left), the president of the WGB Board of Directors.

On Friday, several dozen high school girls gathered at Great Falls Library to hear about how they could get involved in volunteer opportunities. As part of Congresswoman Barbara Comstock’s 10th Congressional District Young Women Leadership Program, these students were taught about the benefits of giving back to their communities.

A panel of guests spoke at the event, many of whom were from the organization Women Giving Back, which provides free clothing to homeless women and children in the area.

“Volunteerism looks great on a resume, but more importantly, it helps you think differently.”

--Shirley Clark, the CEO and executive director of the Women’s Center in Vienna

“Volunteerism really makes a difference,” said Terri Stagi, the president of the WGB executive committee. “It adds something to your life.”

According to Stagi, the young women at the program could volunteer for WGB by sorting clothing or even being personal shoppers for some of the teenagers being served by WGB.

Shirley Clark, the CEO and executive director of the Women’s Center in Vienna, echoed Stagi’s sentiments. According to Clark, volunteering is about more than just building a resume — although it can help with that as well.

“Volunteerism looks great on a resume, but more importantly, it helps you think differently,” said Clark.

Clark and Sally Turner, the president and chair of the Women’s Center Board of Directors, also discussed combatting pressures on women in the workplace.

According to Turner, when she was growing up, girls were told they could be secretaries, teachers or nurses. However, her grandfather owned a business school, so Turner went to business college during the summers and was able to get a job in the IT field. Turner urged the girls to get out of the office and meet people in their future careers, and to know when to move on from one job to the next.

Clark said she noticed during her banking career that many women didn’t speak up or use their voice at work.

“While they may have had food and clothing and housing and even a job, they were really disadvantaged, as well, because they didn’t have the confidence or the support they needed to get to the next level,” said Clark.

Clark said that seeing women “give our power away” encouraged her to get started working to help women,

She encouraged the girls to volunteer and help women, even if only for a short time.

Comstock, who hosted the event, said that volunteering helps to enrich the lives of those who are helping, as well as those who are being helped.

“Whatever that passion is that you have,” said Comstock, “when you share it, you probably learn more about yourself and your abilities by doing that.”