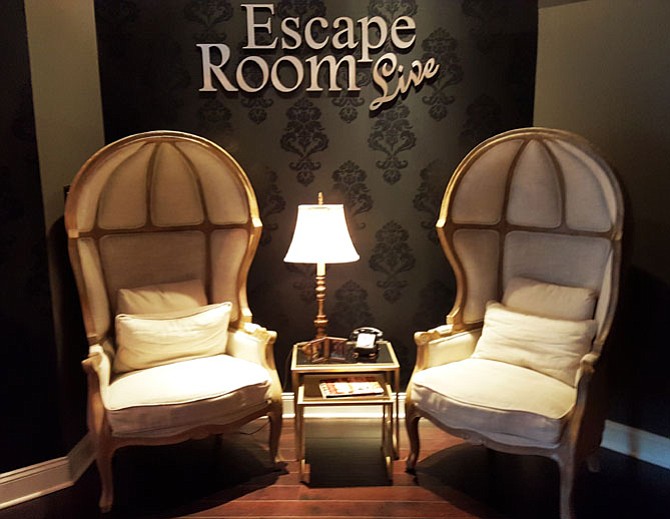 Escape Room Live is designed for participants to unlock their exit by solving puzzles. Photo by Evan Jenkins/Gazette Packet

Darren Sonnier was traveling in Prague when he and his wife, Ginger Flesher, decided to do their first escape room together. After a few more, they were hooked.

“[We] signed our lease in Glover Park [in D.C.] before we even got home,” said Sonnier. 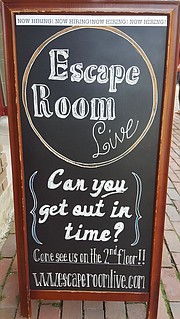 “I think it’s the owners who are pushing the suppliers, like me, to use more technology, more cutting edge, maybe even these movie tie-ins as well, but I don’t think we’re ready for that yet, I don’t think we need to do that yet.”

Flesher was a teacher and department head for math and science at high schools around the country, so she’s used to creating problems for students to solve; Sonnier was a green beret in the military.

“We always wanted to be on King Street,” said Sonnier. “It was really hard initially to find someone to rent to us because the real estate is tough around here.”

Sonnier and Flesher built up their reputation as #1 Fun and Games on TripAdvisor in Glover Park and brought Alexandria council members to try out their escape rooms. That sealed the deal for getting their foot in the door in Old Town.

Since 2014 Google searches for escape rooms have been growing drastically, the search term “escape room” has grown by 500 percent in the last two years. The concept is simple: A group is locked in a room and tasked to find clues and solve puzzles to get the key for their escape. What makes places like Escape Room Live in Alexandria and D.C. engaging is the way in which the puzzles are presented. In one of the Alexandria location’s newest rooms, “Poe-ranormal Activity” guests are asked to go to Edgar Allen Poe’s old study and discover what happened to a historian who went missing, as well as search for the “Lost Manuscript” that he was looking for. The rooms make use of technology such as pressure sensors and augmented reality as well as simple fill-in-the-blank puzzles to guide guests towards their goal.

As with any new industry, escape rooms have been going through different design benchmarks. Generation 1 rooms were the first to appear.

“All the games in the nation were Gen 1,” said Sonnier. “They were more puzzle oriented and almost no technology, no hidden magic, nothing.”

Now, the rooms at Escape Room Live are Generation 2 or 2.5, while their newest location, which is opening in July on M Street, is going to be labeled as Generation 3. “We actually partnered with movie studios for the themes of the rooms,” said Sonnier, “We’ll have Hollywood set designers come in, so it’s going to be like Disney Land, Disney World, Universal Studios quality sets.”

Escape Room Live isn’t the only escape room company opening their doors in the D.C. and Northern Virginia area. Many businesses and individuals are trying their hand at making puzzle rooms for people to escape throughout the region. Businesses identifying as escape room suppliers are beginning to spring up as well, such as a company entitled N.E.R.D., or New Escape Room Designs, Inc., based out of London, Ontario in Canada. Potential escape room owners across the continent can buy everything from story ideas to complete room layouts from suppliers like N.E.R.D.

Andrew Parr, the owner and puzzle designer at N.E.R.D., agrees that the escape room industry is changing, but it may not need to.

“The general public, even after a couple years of escape rooms being huge in North America, they’re still learning what the game is, and they still haven’t played their first game yet.” said Parr, “I think it’s the owners who are pushing the suppliers, like me, to use more technology, more cutting edge, maybe even these movie tie-ins as well, but I don’t think we’re ready for that yet, I don’t think we need to do that yet.”

While the debate over trying to use the latest technology versus more traditional methods is found in every industry, both Sonnier and Parr have the same goal in mind. “I think the end result is that players have a good time,” said Parr, “and that they come away telling their friends that they’ve got to try this room, for whatever reason that may be.”