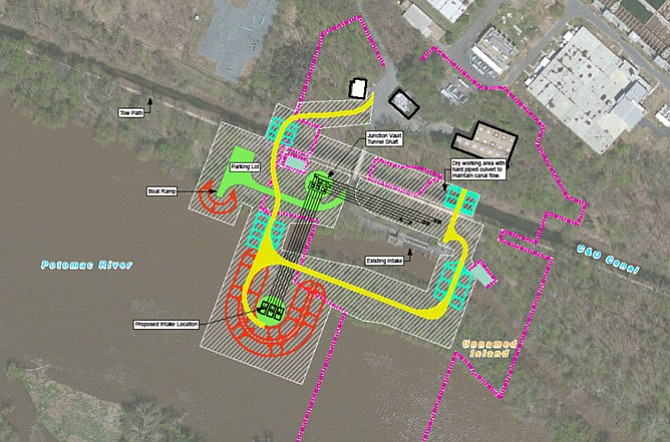 Many don’t worry about where their water comes from, but as part of the Washington Suburban Sanitary Commission (WSSC), it’s Simon Baidoo’s job to worry. For the last decade Baidoo has been project manager over one proposal in particular: adding a new offshore intake to the Potomac Water Filtration Plant.

The plant, which overlooks the Potomac, draws and treats up to 400 million gallons of water from the river each day, distributing drinking water to nearly 2 million people in Montgomery and Prince George’s counties. Its current intake is situated by Swains Lock of the C&O Canal, and draws water from the Potomac’s shore, at a point where an unnamed island creates a natural sort of funnel. This intake has served the plant since its construction in 1989, but in May of 2002 a source water assessment convinced the WSSC to take another look. 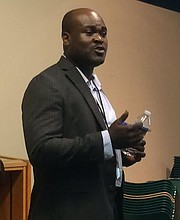 “The assessment found that the source water was not only cleaner but much more consistent and uniform at the center of the river,” Baidoo said at a public meeting on Thursday, July 14. “That’s what’s driving this.”

According to Suzie Boltz of EA Engineering, Science, and Technology, Inc., the main problem is the runoff which deposits heavy sediment in the river’s shore water, particularly after big storms. This isn’t a problem to the average faucet-drinker, because the water still gets filtered. However, cleaning the extra runoff exacts a toll on the plant itself, which not only has to clean out this additional sediment, but also has to play a balancing game as the river’s sediment concentration levels swing.

This runoff effect is lessened further from the river’s shore, and WSSC Chief Engineer Richard Shagogue predicted building a new intake to draw from this cleaner, stabler source could shave $800,000 from the plant’s annual $1.8 million in maintenance and treatment costs.

Since then the project has been chugging along, working its way through environmental impact surveys and special use permits, but Boltz predicts the project could finally begin work within 3-5 years, and reach completion about 4 years after that.

But not everyone is enthusiastic about these developments. “We can’t just leave our problems and go further and further into the river,” said Ginny Barnes, environmental chair for the West Montgomery County Citizens Association (WMCCA). “This is the last straw in the drink. After this there’s nowhere else to go.” Barnes’ argument is that instead of spending money to move the intake out to cleaner waters, the problem should be combatted at its source: the polluting runoff that made the shore water so dirty in the first place.

A large portion of the runoff pollutants, Barnes said, come from the watershed of the Watts Branch tributary, an area adjacent to Rockville Town Center and the Interstate 270 corridor. This area’s rapid residential and commercial development in the last 50 years have been paid for with increasingly poor water quality. “I live by Watts Branch,” Barnes said, “And it’s so muddy, in storms it looks like chocolate milk. It’s been worsened by all the development we’ve allowed and all the storm water management we haven’t done.”

This is where Barnes would start if the decision were up to her, although she acknowledges such a course of action would be “harder, it would take multi-jurisdictional cooperation, it would take cleanup. But we need to look at alternatives that actually do something to repair existing damage, or what will we do in 50 years when the sediment has reached the middle of the river too?”

WSSC and WMCCA both agree on the importance of greater community participation in the decision-making process. Comments, ideas, and criticisms about the new intake project can be submitted online at http://parkplanning.nps.gov or mailed to: Chesapeake & Ohio Canal National Park, Attn: Chris Stubbs, 1850 Dual Highway, Suite 100, Hagerstown, MD 21740.

All submissions should be made before midnight of Aug. 14 to benefit the decision-making process, and guide the future of the river.