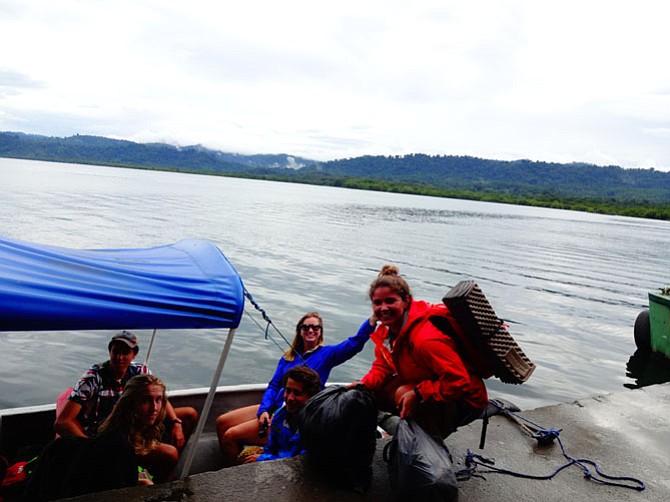 Rappelling down an 80-foot waterfall, the ground appearing miles away, zip lining through thickets of dense, steamy rain forest, treating wounded travelers in the wilderness and engaging in other limit-pushing adventures — that’s how three local young adults spent their time after graduating from high school.

“Scuba was definitely my favorite part of the course because of a strong reinforcement that I would enjoy working as a scuba instructor one day,” said A.J. Galindo or Alexandria. His adventure was part of Outward Bound’s Costa Rica program.

Galindo took what is known as a "gap year,” which means taking an academic break for a year or a semester before beginning college. Gap year programs offer students an opportunity for “personal growth in … leadership, self-awareness [and] … character development,” said Soizic Hagege, spokeswoman for Outward Bound Costa Rica.

The American Gap Association (AGA), an organization that accredits and sets standards for gap year programs, reports that taking a gap year has become an increasingly popular choice for American students. The association has seen renewed interest since Malia Obama’s recent decision to take a year off before beginning her studies at Harvard University.

A RECENT AGA STUDY showed that students who took a gap year over performed academically in college. The organization released the results from a survey of its 2015 alumni. More than 90 percent of the alumni surveyed credited their gap year with increasing their self-confidence and maturity as well as offering time for personal reflection.

Uncertainty about future plans is one of the reasons students decide to take time off between high school and college. “Some don't know yet what they want to study, or want to take the opportunity to travel or work to get experience in the real world,” said Francesca Reed, associate vice president for Enrollment Management and director of Graduate Enrollment Services at Marymount University. “A gap year … can be a great opportunity for a person to mature and discover their interests before pursuing a college degree.”

Experiences gained during a year away from school can offer clarity, says Jim McClellan, PhD, dean of Liberal Arts at Northern Virginia Community College in Alexandria. “Few students know what they want from life or what will be their life's work when they first enroll in college,” he said. “Few finish college in the same major where they began. Sometimes a year of reflection can help a student focus. A year abroad or in some environment beyond their previous experience can offer new perspectives. Working at a 7/11 convinced me I needed to continue college.”

"Sometimes a year of reflection can help a student focus."

While the AGA reports that 90 percent of students are actively enrolled in a four-year institution of higher learning within one year of completing a gap year, the organization acknowledges that this option is not for everyone. The decision to delay college comes with a caveat that students may lose the academic momentum they gained through high school.

“There is a set of skills that a student learns moving through each grade level. Like playing tennis or any other sport, the more practice, the better the performance,” said McClellan. “Laying out for a year leads to skills atrophy. [For some students] it is better to continue on while in top form than to try to rebuild lost skills and regain good study habits.”

Even for students who feel certain that they want to take a gap year, Reed advises completing the college application process if obtaining a college degree is future goal.

“It is easier while they are still in school to gather letters of recommendation and use the resources of guidance departments when applying for college,” she said. “It will also keep them focused with a future plan. If the student decides to go abroad or work full-time, it may be difficult to request a letter of recommendation while they are busy overseas or with work. Once accepted into college, they can defer their admission a semester or a year.”

Boosted by a belief in the benefits of a gap year experience, a growing number of colleges and universities are supporting students who want to take time off between high school and college. “Most colleges are accommodating and will move their start date to the following year,” said Reed. “Colleges and universities like to see students with a plan and a degree of motivation before entering college, and the gap year may be the perfect opportunity to do just that.”

RESEARCHING OPPORTUNITIES, thinking about goals and having a plan in place about how the time will be spent are critical components of a successful gap year. “They shouldn't wait until they graduate to start planning,” said Reed. “Do you want to travel abroad? Learn a new language or improve your foreign language skills? Volunteer either at home or abroad? Explore career interests? It's important to have something meaningful in mind. There are many programs available for students that are considering a gap year.”

McClellan suggests an alternate option for students and parents who are concerned that a gap year could slow a student’s academic progress. “Spending the junior year abroad is a better idea since no academic momentum is lost and the experience of living and studying abroad is of incalculable value,” he said. “Plus, with two years of college completed and added maturity, the junior year abroad is more meaningful than a gap year.”