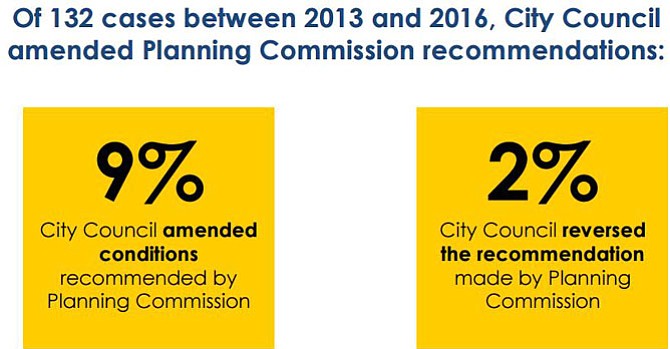 Administrative Special Use Permits are approved at a staff level, which is a 30-day process and can cost between $250 - $325. Full Special Hearings before the Planning Commission and the City Council, on the other hand, can take three months and cost approximately $575.

Items that can now be approved by staff include minor changes for restaurants, the amount of delivery vehicles a restaurant can receive, and the number of cars stored in an industrial zone. Private commercial schools and retail and personal services in a W-1 zone formerly required Special Use Permits but can now be considered permitted uses.

Toyama made particular note, however, that parking reductions would not be included in the administrative review.

“This is about providing businesses certainty,” said Councilman John Chapman. “We can’t do things in a quick, hurried fashion all the time, but we need to provide certainty where we can.”

Several local economic leaders spoke in favor of the text amendments, notably Maria Ciarrocchi, vice president for public policy with the Alexandria Chamber of Commerce, and Stephanie Landrum, CEO of the Alexandria Economic Development Partnership (AEDP). Landrum said the text amendments make it easier for Alexandria to bring in smaller amenities, like day care and yoga facilities, which in turn Landrum says draw in the “bigger fish,” clients that fill larger commercial spaces.

At the end of the presentation for the text amendment, staff rolled out the beginnings of a larger proposal that could change the basic structure of city government. The proposal was a charter amendment that would give final approval authority for non-development, use-based SUPs to the Planning Commission. These would be special use permits for things like amusement enterprises, auto service stations, and drive-through restaurants. City Council would still have final authority over non-use based SUPs, meaning items that require height, zone, or parking modifications, and Toyama said staff was currently working on a potential appeals process that would allow residents affected by a Special Use Permit change to take the issue directly to City Council.

The Charter Amendment would create a shortened review cycle while maintaining the public hearings for changes to local businesses. As a change to the city’s charter, it would require approval by the Virginia General Assembly. But several in the community, and on the City Council, were disturbed by the implications of the change.

Local civic activists Jack Sullivan and Amy Slack spoke regarding concerns that the Planning Commission, a non-elected body, would become the final authority for many business proposals. Slack, who previously chaired the Del Ray Citizen Association’s Land Use Committee, said that she’d seen how any organization that opposes a special use permit or asks for conditions is immediately labelled anti-business and is publicly ridiculed.

“When [a special use permit] would come in it was considered already settled,” said Slack. “We’d say ‘let’s just walk away from it, let’s not worry about it … let’s not talk about it.’ So we never contested them. We never made a stink about it because of our reputation as being anti-business.”

Slack wasn’t alone. The charter change was a proposal, not an item to be voted on, but Mayor Allison Silberberg and Councilmen Paul Smedberg, Redella “Del” Pepper, Timothy Lovain, and John Chapman all expressed their disapproval of the proposed charter change.

“I don’t feel comfortable with charter change,” said Smedberg, “and I don’t feel like staff should waste time pursuing it.”