Arlington: ‘A Lot of Project in a Little Space’
Votes

Arlington: ‘A Lot of Project in a Little Space’ 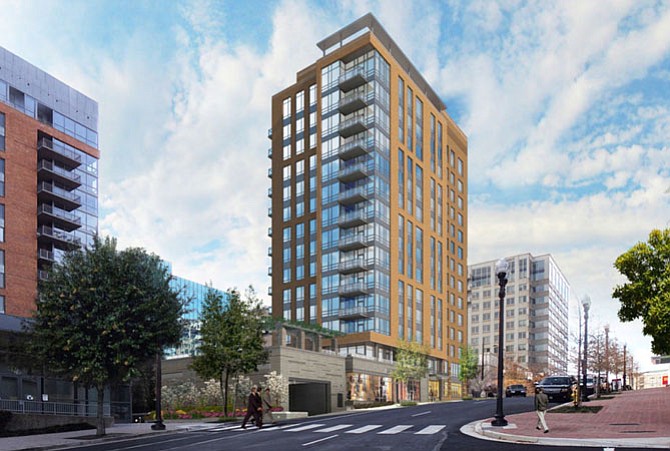 As Arlington County’s population continues to climb, projects are getting more densely packed together. The latest example is the new 14-story condominium building on 2000 Clarendon Blvd. approved at the June 18 Arlington County Board meeting.

The project is 18,380 square feet and is pressed between Odyssey Condominiums and other high-rise development. The site is currently occupied by a squat, three-story building. The owners and residents of Odyssey Condominiums filed letters and showed up in person at the meeting to protest the development, asking that the project be delayed until further negotiations could reduce the density of the project or shift the tower of the new development to not block views from current Odyssey residents.

County Board member John Vihstadt sided with the residents and said the application should be deferred to allow more time for negotiations.

“There’s a difference between compliance and what’s right for the county,” said Vihstadt. “I think the project would benefit from a month of deferral.”

While Vihstadt was the only member to support the deferral in a 4-1 County Board vote, other members of the board expressed their own unhappiness with the project.

“This is a site that, otherwise, nothing would happen to it. So it’s good that we have a project that is going to provide some level of benefit,” said Dorsey. “But at the same time, it comes at a cost, not only for the residents of Odyssey but also for the community.”

Concerns were raised about traffic on the adjacent two-lane Clarendon Boulevard, especially with new retail options being included in the ground floor of the development. But among those who voted in favor of the project, the general sense was that the project’s benefits outweighed its flaws and that one month of further negotiations would not fix the project’s problems. Of the building’s 90 condominiums, four are reserved as affordable housing units.

“In the end, this will be a great enhancement to this block and for the residents of the Odyssey as well,” said County Board Member Jay Fisette, noting that he too wished the tower was not located in a place that obscured views from Odyssey. “Five or 10 feet further would have been preferable … I think we all agree we would have rather been there, but that was not within our control. Compared to what is there now, I am somewhat heartened that there was a buildable option and that the little dumpy building isn’t going to be there forever.”

Fisette was the most optimistic voice on the board. Among the others, lingering doubts remained about issues with communications between the two developments packed in close together.

“Comfortable is not a word I’d use to describe where I am on this project,” said Dorsey. “We’re balancing the scales. On the one hand, there’s a lot to like, the affordable homeownership component is unique and different. It’s a lot of project in a little bit of space. It’s going to have big consequences."