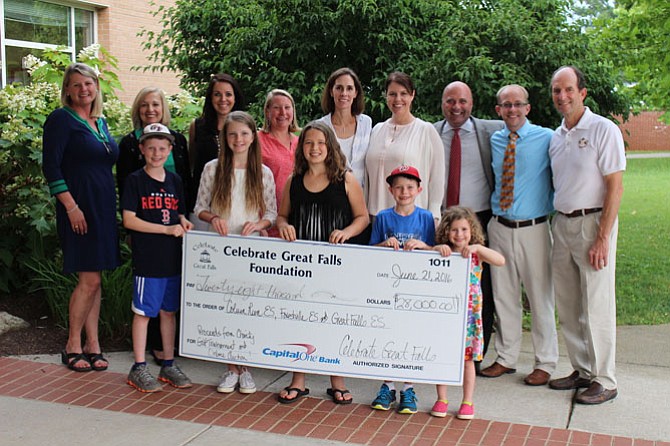 After efforts from parents, teachers, students and community sponsors, the Celebrate Great Falls Foundation was able to present a check donation of $28,000 to be distributed between Great Falls Elementary, Colvin Run Elementary and Forestville Elementary. The money was raised during the 10th annual golf tournament at Hidden Creek Country Club.

The golf tournament fundraiser, though finishing its 10th year, has only been paired with the elementary schools for the past six years. "It was the perfect marriage," said Erin Lobato, director of the Celebrate Great Falls Foundation and co-chair of the fundraising effort at Forestville Elementary. When the tournament initially began benefitting schools, it focused on Great Falls Elementary but soon expanded to include Forestville and Colvin Run as time went on. "I'm just so struck by the fact that there are three different schools all working together," Lobato said. 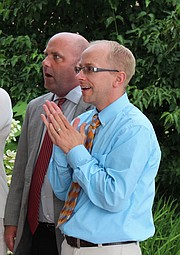 Todd Franklin, principal at Forestville, and Ken Junge, principal at Colvin Run, react to the amount revealed on the check presented to the schools by the Celebrate Great Falls Foundation. This year's fundraising effort brought in $28,000 for the schools.

This year, the fundraiser included an online silent auction, which raised around $13,000 on its own.

"Deanna Keys was the mastermind behind that," said Lobato, in reference to the online auction. Keys is a parent at Forestville and the auction chair for the event. "She was able to solicit so many items and get them on the website within the day." Lobato continued, adding that there were more than 130 items available during the event. "It's really neat to see such broad support in the community."

And it wasn't just the community sponsors who pitched in. "The teachers and parents were incredibly generous with their time," said Lobato. There were events within the schools to raise money as well that the teachers, parents and students helped organize and promote. The schools' gifts contributed about $2,000 to the fundraiser.

"We have the same goals, expectations and ideals," said Sara Harper, the principal of Great Falls Elementary. "We want to improve literacy and opportunities to best support our students."

"We're grateful to be able to provide our children with additional opportunities," added Ken Junge, the principal of Colvin Run Elementary. "We are one community, and this will affect all of our community."