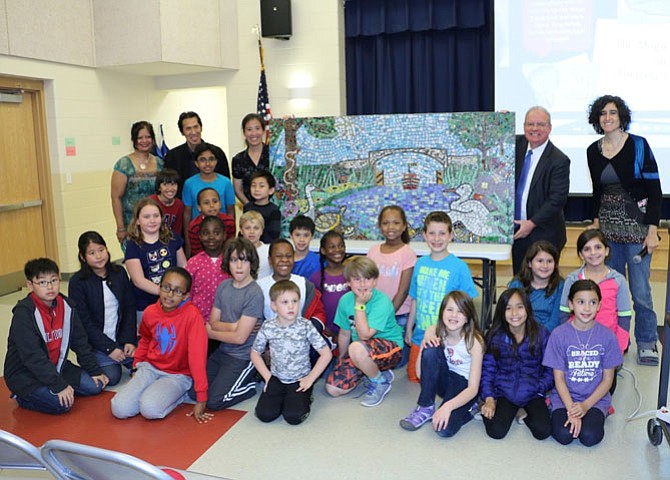 Each class at Seven Locks Elementary School looks forward to field trips to the C&O Canal. They study the ecosystem, gain an understanding of the history and the economics, experience the fun of dressing up in the clothing worn by the lock keepers and families who lived on the canal boats, meet the mules and take a ride on the General Jubal T. Early canal boat. They learn to love and appreciate the nearby C&O Canal through their school’s collaborative educational partnership with the National Park Service (NPS).

The school and Seven Locks Road are named for the seven locks area of the C&O Canal, a 1.25-mile stretch with seven locks in a row. Park Ranger Becca said, “If one wants to see the greatest number of locks together, this is the place to do it. Seven Locks included Locks 8 to 14 — it's hard to imagine locking upwards of 550 boats through all seven locks. Seven Locks inspires a sense of amazement about how all this was done with only water and human power. No modern machinery or petroleum products helped with the task of lifting and lowering these boats, which could weigh 140 tons each.”

When the school was remodeled a few years ago, the school community chose to honor their namesake by including a replica of the gates of a lock, historic photos of the canal workers and the canal and a flowing water theme on the walls.

This year, to pay tribute to the 100th anniversary of U.S. National Parks and their partnership with NPS, the third and fourth grade students created a tile mural of the C&O Canal. Working with the school’s artist-in-residence, Arturo Ho and their art teacher, Adrienne Torrey, the students’ mural depicts the C&O Canal as they see it. They included frogs, blue herons, turtles, squirrels and a snake. Trees and wild flowers abound as the water flows through the canal and the Jubal T. Early canal boat makes its way down the waterway. The mural is a composite of student design ideas and sketches. After the design was completed, each student helped create the mural by placing tiles in a designated section.

“I really enjoyed talking about what we saw at the C&O and how it should go into the mural,” said student Jenna Pigott.

Lauren Berman said, “We added in so many things from nature. It is very detailed.”

Third-grader Dawn Digo was excited and amazed by the completed mural. “It looked just like the sketch,” she said.

William Jiang said, “It looked real. I worked on putting the little tiles for the sky into the mural. I couldn’t believe that all these little pieces would ever come together to look like a picture — but it did.”

The mural was unveiled at a special ceremony held at the school for parents, staff and students. Dr. James Virga, school principal, explained that the NPS adopted Seven Locks Elementary in 2012.

“This has been an outstanding partnership and we thank Hollie Lynch of NPS for leading programs for us for so many years. In addition to the mural, this year’s fifth grade class created a time capsule. They put in original poems, a song they created, canal boat replicas that they made, writings of how their visits to the canal impacted them and photos from some of their field trips.”

Lynch explained that curriculum was created to include each grade in the school. “This is a program unique to Seven Locks Elementary School,” she said. “The students visited the Williamsport Lock where they had the experience of pushing and pulling the locks. They met the mules, rode on the canal boat, participated in science experiments and learned about our National Park Service. They were excited to help us celebrate our 100th anniversary.”

Art teacher Adrienne Torrey said, “I’m pleased that we can celebrate our artist-in-residence, our foundation which helped fund the project and the students’ mural. It really is a wonderful creation of the C&O Canal which will be on permanent display at Seven Locks Elementary — one that we will all cherish. The final design included all the student ideas and is a beautiful work for art for our fifth graders to leave to the school. Every time they return, they will be proud of their contribution to their elementary school.”