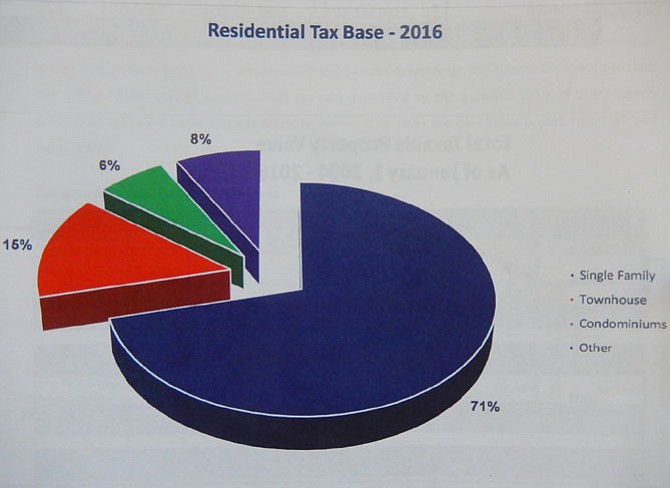 Composition of the City’s residential tax base.

Think it’s tough balancing a household budget? Try dealing with one that is more than $166 million.

That is what Fairfax City Manager Bob Sisson, finance director David Hodgkins and budget manager Kerry Kidd had to do. And last Tuesday, Feb. 23, Sisson presented the proposed Fairfax FY ’17 budget to the City Council.

It increases funding for education and public works and recommends a real estate tax increase of 2.7 cents per $100 assessed valuation. So, for example, owners of a home valued at $300,000 would see an annual tax bill hike of $161.

Yet the 500-page document is by no means the final budget the City will approve. Before the April 27 budget adoption, Mayor Scott Silverthorne and the Council members will give it intense scrutiny and make their own changes and recommendations before setting the final, real estate tax rate.

THE PUBLIC, too, will get a chance to weigh in during public hearings set for March 8 and 22 and April 12 and 27. Meanwhile, Sisson gave an overview to the Council last week, explaining the justifications for the dollars needed to run the City.

“In November, City Council gave City staff budget guidelines, and we used them plus the City’s fiscal policies,” said Sisson. “We’re proud of our AAA bond rating, and we have unsurpassed services and a low, tax burden.” However, he added, “There are a number of challenges City staff faced to bring a budget to the Council.”

For instance, said Sisson, “There’s a whole menu of capital improvements to take care of the City infrastructure and public works projects. So I made it a priority to increase the money for street maintenance – overlay, concrete curb and gutter replacements. And there’s also a significant increase in education funding.”

Yet despite the best planning, unexpected events can also wreak havoc on a budget. Case in point was last month’s blizzard, which dumped more than two feet of snow in the City.

Employee pay increases were also a consideration in this year’s budget. An employee compensation study will be completed this spring. In the meantime, Sisson included $300,000 to implement the study’s recommendations. However, he stressed that this amount is just a “placeholder” until the final results come in. In addition, he earmarked funds to give each City employee an average 1.5 percent pay hike. But, said Sisson, “Staff recommended five new employees to help reduce the workload and we didn’t include [hiring] any of them.”

Revenue from the C & I (commercial and industrial) tax helps fund transportation improvements, and the City needs a 12.5 cent tax to qualify for matching state funding. “Last year, we went from 5.5 cents to 7.5 cents and made up the gap in money from the leftover water fund money,” said Sisson.

This year, he said, “We’ll recommend the same thing and method of funding it. So we’re recommending an additional two cents for a 9.5 cent C & I tax, with the $365,000 gap coming from the water fund. And we’ll keep doing this until we eventually get to 12.5 cents.”

Sisson noted, as well, a raft of nondiscretionary expenses out of the City’s control. They include a $47.2 million educational contract with Fairfax County – an increase of $1.1 million over last year – plus $13 million annually in debt service. Last year’s non-discretionary amount accounted for some 56 percent of the budget; this year, it is about 60 percent.

So, said Sisson, “A huge amount of our budget is out of our reach to cut back on expenditures. Ten cents of every dollar we spend in the community goes toward debt services – and that is significant – and we won’t get serious relief for a number of years.”

Total City expenditures for FY ’17 are expected to be $166.8 million – an increase of 2.35 percent over the previous fiscal year. General Fund expenditures are pegged at $136 million, with $54 million total for education comprising the largest component.

Of the $136 million in General Fund revenues, the largest single source is real estate property tax, making up 49.4 percent. However, Sisson noted that, “Our reliance on it is less than Fairfax County’s.”

He said $5.6 million in additional expenses this year include employee compensation, City and county contracts, plus capital improvement (CIP) projects. “The list of capital projects is sobering – about $8 million [worth], after cutting back $2.7 million,” said Sisson. “The CIP transfer is $1.7 million more this year, county contracts are going up $300,000, and there’s a $50,000 increase to the Renaissance Housing project,” providing money to the City’s housing improvement fund.

“So how do we pay for it?” he asked. “Unfortunately, after we look at all the revenues we currently have, we’re going to have to recommend a real estate tax rate adjustment from $1.052 to $1.0815, and a 2-cent increase in the C & I tax. But we’re confident that our ranking as one of the lowest taxed jurisdictions in Northern Virginia will remain intact.”

Yet while sales tax revenue is up and the City’s real estate tax base has increased 2.1 percent over 2015, said Sisson, “We’re seeing a significant loss in projected revenue in court fines and forfeitures, BPOL taxes and ambulance fees. And with bus ridership down, we project a $50,000 loss in revenue from the CUE buses.”

Furthermore, he said, “What we’ll need for stormwater maintenance this year and in the years to come is more than we can fund with the current two cents [that goes to it] from real-estate taxes. So we’re recommending an increase of a quarter of a cent to 2.25 cents for stormwater management.”

The wastewater utility rate is also earmarked to rise 10 percent, with the average residential quarterly bill increasing from $150 to $165. “We spend $2 million annually with Fairfax County to treat 1 billion gallons of wastewater coming from the City,” explained Sisson. The City must also pay $40 million over several years to clean the wastewater effluent according to EPA regulations, in addition to debt service on improvements to the Normal Cole wastewater treatment plant.

Overall, said Sisson, this budget’s three priorities were “education, employees and infrastructure. But there’s diminished funding for parks and recreation; and, frankly, we’ve done little or nothing to fund our Parks and Recreation Master Plan. We’re only doing what we have to do.”

After his briefing, Councilwoman Nancy Loftus said she was disappointed with the tax hikes recommended. “At some point, we have to rein in our spending and take control of the budget,” she said.

But, said Mayor Silverthorne, “We’re going to have March and April to dig in, and individual department heads will give presentations to the Council on specific details.”