The Nowruz Festival will be held Sunday, March 13 at Tysons Corner Center. 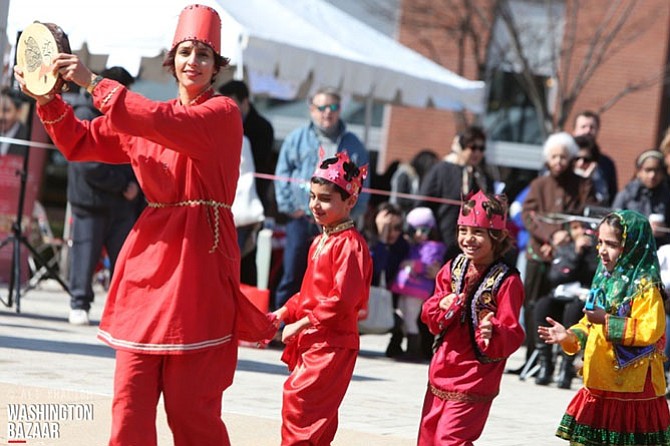 The Nowruz Festival celebrating the Persian New Year will be held on Sunday, March 12, from 10 a.m. to 6 p.m. at Tysons Corner Center. File photo

This year's festival, with more than 55 booth vendors, is free and will be held in front of Bloomingdale's at Tysons Corner Center.

Following 3,000 years of customs and traditions, the colorful Nowruz Festival -- the Persian New Year celebration -- will be held on Sunday, March 13 from 11 a.m. to 5 p.m. This year's festival, with more than 55 booth vendors, is free and will be held in front of Bloomingdale's at Tysons Corner Center.

Nowruz, which normally falls in early Spring, is when Persian-Americans will join locally to celebrate the new year. There will be 55 vendors offering traditional and exotic foods as well as jewelry, artwork, crafts and other traditional Persian products. A main stage will be set up that provides entertainment around the clock with 60 musicians, dancers, artists, costumed characters and traditional players.

"Enjoy music, dance, dramatic performances and meet with costumed characters roaming the festival. Shop in our bazaar or savor the flavors of Persia in our food court," said organizer Shohreh Asemi.

The Nowruz Festival is a family-friendly, fun celebration that celebrates life, love and good will. Of all the Persian national festivals, the New Year celebrations are at once the most important and the most colorful. This festival embodies a wealth of ancient rites and customs, and is about the only one in Persia which is not confined to the traditions of only one religious group. It symbolizes that continuity of the ancient Persian culture which has survived so many adversities and vicissitudes.

The venue provides a fun place for people to celebrate with family and friends, to taste delicious Persian food and enjoy traditional and modern Persian entertainment. Among the traditions, is a ceremonial table called the cloth of seven dishes (each one beginning with the Persian letter Sin). The symbolic dishes consist of Sabzeh or sprouts, usually wheat or lentil, representing rebirth. Another is Samanu or a sweet, creamy pudding. Another is Seer, which is garlic in Persian, which represents medicine.

In addition to attracting people from Virginia, Maryland and the District, this year, organizers hope to attract international guests from other countries that celebrate Nowruz, including Turkey, Afghanistan and Tajikistan, among others.

A main stage will be set up that provides entertainment around the clock with 60 musicians, dancers, artists, costumed characters, and traditional players.

The goal is to share the Nowruz Festival with both Persians and non-Persians. The event sends out positive messages, like celebrating earth, spring time, love and peace to the community. Planners want to bring different musicians and dancers from other countries that celebrate Nowruz, as well as new musicians that offer more variety to the festival. They also want to bring different historical and costumed characters from Persia (like Haji Firuz, a traditional herald of Nowruz dressed in a red costume and tambourine) that will interact with the crowd.

The Nowruz Festival will be held Sunday, March 13, from 11 a.m. to 5 p.m. at Tysons Corner Center in front of Bloomingdale's, which is at 8100 Tysons Corner Center, McLean. For details, contact organizer Shohreh Asemi at 202-369-1515 or visit http://nowruzfestival.org.