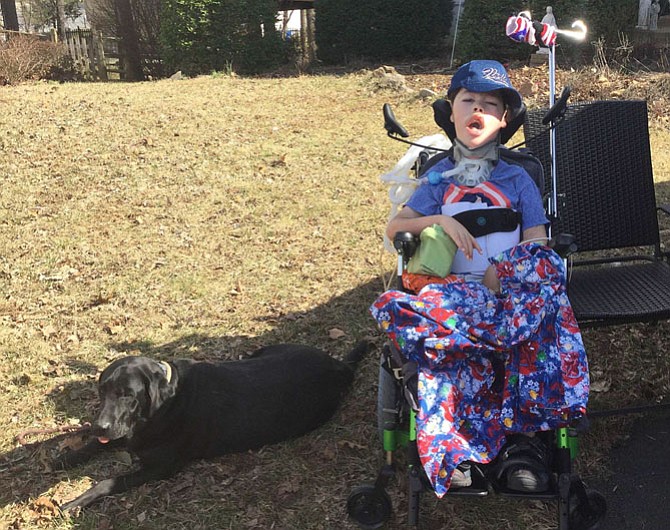 Liam Bruen outside, relaxing with his dog, Patch. Photo Courtesy of Jamie Bruen

Like most little boys, Liam Bruen loves superheroes and playing with his dog and his friends — he just does it from a wheelchair. Born with muscular dystrophy, he was officially diagnosed one-and-a-half years ago.

And although he’s mostly nonverbal, he can move his fingers to use assistive technology to communicate. “The whole world has opened up to him since he started using this computer two years ago,” said his mom, Jamie Bruen, of Centreville’s Cabell’s Mill community. “He loves it and being able to go to school and learn.”

Liam, 6-and-a-half, is in first grade at Poplar Tree Elementary, where he takes both special-education and general-education classes. “He’s the happiest kid — he’s such a joy,” said Bruen, a single mother. “He has a very active mind, can make facial expressions and will make certain sounds to tease me. For ‘yes,’ he’ll make his eyes big or will say, ‘Uh, huh;’ and for ‘no,’ he’ll blink or say, ‘Eh, eh.’”

“A nurse goes to school with him and comes to our home at night so I can sleep,” she continued. “Liam needs someone with him 24 hours a day because he’s on life support. We live with my parents — I couldn’t do this without them.” 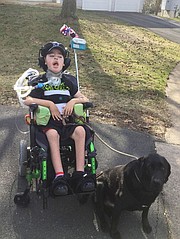 When he’s not busy with school, Liam enjoys humming songs, especially, “Hi, Ho,” and watching his favorite movie, “Snow White.” He also likes reading about Curious George and superheroes like The Hulk and watching “Handy Manny” on Netflix and “Marvel’s the Avengers.”

“Liam also loves to go to the pet store and see the chameleons and birds,” said Bruen. “He absolutely loves the birds.” And he’s overjoyed about having a companion dog, a black Lab named Patch, courtesy of Make-A-Wish Mid-Atlantic, which grants the wishes of children with life-threatening, medical conditions.

“Liam loves dogs, and we had them in the past, but they weren’t companion dogs,” said Bruen. “We couldn’t raise a puppy and Liam wanted a big dog, so we needed one that was full-grown. So I contacted Make-a-Wish, a few years ago, but it took a while to find a dog – and one with the right temperament and age.”

The Guide Dog Foundation for the Blind trained Patch, who’s 2 years old. “He’s a great dog, and very sweet and curious,” said Bruen. “Liam wanted a dog he could play with and chase around in his wheelchair, and that’s what he got.”

Patch got his name because he has one, white patch on his otherwise black fur. He spent a day with Liam, before Christmas, to see if they’d be a good fit, and Liam loved him. Now, said Bruen, “He loves taking Patch for a walk and throwing a ball to him with my help. Patch is gentle and mild-mannered, and he’s happy here; he even has play dates with some neighbor dogs. But his main thing is to be a companion dog and help Liam interact and play with other kids. Then at night, he’ll curl up by Liam’s bedside.”

Liam has fun taking Patch outside and is always excited to show off his furry buddy to his friends and other family members. “It feels like our little family is complete,” said Bruen. “Liam has his own dog, and it makes the little things of life more exciting.”

Liam even helps feed him by making sounds to help his mom count out the scoops of food Patch needs to have. Doing so, said his mom, gives Liam “more responsibility and more of a typical life like other children who do chores.”

“I want to say thank-you to the Guide Dog Foundation for the Blind and to Make-A-Wish Mid-Atlantic and the volunteers who helped facilitate this,” said Bruen. “Patch is a wonderful dog who gives our lives more variety and makes life a little more fun. We’re just beyond grateful.”