It's frustrating but necessary.

From elected officials to Metro riders just passing through, this has been the response to the long-awaited plan to fix the Washington Metro. The plan comes after years of delays and safety hazards, including the death of Alexandria woman Carol Glover in a fire in early 2015. The plan, released by the Washington Metropolitan Area Transit Authority (WMATA) includes numerous scheduled delays and closures throughout the rest of 2016 to fix the broken rail system. 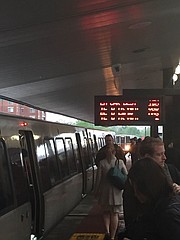 Blue Line trains closely backed up against each other.

“This tells you that the work needs to be done on an ongoing basis. It just gets us to a good state of repair to start to maintain the system the way it should be maintained.”

— Paul Smedberg, City Councilman and member of WMATA Board of Directors

The repairs also will have broader secondary effects. Starting in June, the Metro will close at midnight rather than the usual 3 a.m. on Fridays and Saturdays. The Metro will also not be running extended hours for special events.

City Councilman Paul Smedberg represents Alexandria on the WMATA board of directors and, at a City Council meeting on May 10, explained that the midnight closures will be put in place to allow more time for Metro staff to get on site and set up equipment. The work, as Smedberg noted, is extensive. WMATA’s plans call for complete replacement of thousands of seals, insulators, and railroad ties. Smedberg also warned that these repairs are more about laying the trackwork for future maintenance.

“[This is] about getting a system to a good state of repair to be able to implement regular pattern of maintenance that, quite honestly, should have been happening over the last decade,” said Smedberg. “This tells you that the work needs to be done on an ongoing basis. It just gets us to a good state of repair to start to maintain the system the way it should be maintained.”

One of the other major changes Smedberg said he hasn’t heard widely discussed is that all non-unionized Metro workers are now considered at-will employees, meaning the general manager is directly responsible for their continued employment.

With the repairs hitting the Blue Line in early June, Smedberg said Alexandria will be the first locality heavily affected by the metro reforms. In other words: the whole region will be watching to see how Alexandria deals with it.

Yon Lambert, Alexandria’s director of Transportation and Environmental Services, said during the initial repairs it will be very difficult for trains from Franconia to head into Alexandria. Metro will be running shuttle buses between Pentagon and Franconia, and Lambert said the city is currently looking into how it can expand its bus services. During those times, Lambert said there will be an increasing number of Yellow Line trains from Huntington, and the city is looking at expanding parking options at the nearby Eisenhower Metro Station.

But the metro shutdown impacts only get worse from there. Later in the summer, Lambert estimated the closures along the Blue Line will affect 50,000 weekday trips.

“These are significant disruptions for us,” said Lambert. “We have begun having staff meetings for mitigation strategies.”

Lambert said some of those strategies include additional satellite parking locations, shuttles coordinated with the DASH bus service, and adjusting traffic light signals to account for changes in traffic patterns. Within the city staff, Lambert said that departments are looking at potential telework plans.

“This is akin to preparing for a major snowstorm,” said City Manager Mark Jinks. “We know it’s coming, but don’t know all impacts or how people will behave .... We will be ready on July 6 and prepared to make amendments. We will also be first [impacted], along with Fairfax County. People will be looking at us to see how things perform.”

Councilwoman Redella “Del” Pepper expressed concerns about the impact of additional buses on city traffic. Vice Mayor Justin Wilson said he was concerned about the potentially unseen financial ramifications of the shutdown.

“We don’t yet know what these costs will be, but we’ll know it will be higher than what we have budgeted,” said Jinks. “We may have to reallocate money in the CIP and see where we are on state transportation aid, but we don’t know how Metro will choose to use their costs. We’re going to have to pay very close attention and … think about when we make commitments for spending in the coming year. We’ll have to write a bigger operating or capital budget, either this year or in the coming year.”

Smedberg acknowledged that the repair would come with a significant financial impact, not only in terms of capital costs and mitigation efforts, but with the dramatic decrease in metro revenue.

“It’s something that has to be done,” said Smedberg. “We have no choice.”

In an email, Frank Shafroth, director of the Center for State and Local Leadership at George Mason University, said it will take careful planning for Alexandria to navigate the Metro crisis.

“The Metro Safe Track surge program can best be compared in Arlington or Alexandria to a major snowstorm — except with a little more time to anticipate,” Shafroth said in an email. It’s coming; it will bring major uncertainties. “It means that Arlington and Alexandria — especially, need to plan how to mitigate the impact in regard both to their residents — who largely commute out of the county and city, the business and federal government workforce that largely commutes in from other jurisdictions, and their respective county and city own government workforces, who largely commute into the county and city. Each jurisdiction will be forced to think out of the box with regard to traffic and parking management. Because this is such an unanticipated event, they will have to demonstrate signal flexibility; they will have to closely monitor, and — especially — they will have to be flexible and primed to adjust to the impacts as they occur.”

But Shafroth said a lot of questions remain about WMATA’s planning.

“Because there are so many unknowns, each jurisdiction will also have to closely track the fiscal impact on tax revenues and the cost of the surge: this, after all, was not an anticipated event in the adoption of the budget — and, unlike a major storm — it will last much, much longer.

On the trains themselves, riders seemed to have a universal opinion on the delays.

“It seems necessary,” said Andrew Sue-Ako, a rider waiting at the King Street station. “Better that than people dying, assuming all of the disrepair is true.”

“I think it’s necessary,” said Alex Moore, riding the Blue Line. “Conditions have deteriorated, but the timing could hurt. Virginia closures during the summer could impact us young people going out to bars and restaurants in the evening. Summer is the time when you could really get drivers off the road. The timing, relative to the season, could pose a risk.”

Megan Cole, a friend sitting near Moore, says she’s not as frequent of a Metro rider as he is, but the closures don’t make her more likely to ride.

“Van Dorn is my Metro station, and I don’t know what I’m going to do once the closures hit,” said Cole. “I guess I’m just not going into D.C. those days when it’s closed, because I refuse to drive into the city.”

For others, while the repairs are important, there’s other areas the Metro needs to improve. Sandy Nevzil lives in Reston and recently began using the Silver Line to commute to her work in Alexandria. But Nevzil is legally blind.

“It’s frustrating, because the signs don’t always agree with the trains,” said Nevzil. She says the stories about the fire Federal Center scare her, but she’s willing to wait out the delays in hopes the Metro will improve.

At the Rosslyn Station, the platform is packed. NuNu Deng and Samara Stevens are discussing their 20-minute wait for a train during rush hour. Like Nevzil, Stevens says the communications needs to be improved.

“The information online and sent out by [WMATA] can be incorrect,” said Stevens, saying that one day she was told that the Silver Line was closed, but then showed up at a station where it was running. She didn’t get on the train, and when she asked the station manager about it a moment later, she was informed that it had been running that day and the website was incorrect. Sometimes, Stevens says information seems to change depending on which station manager you talk to.

“There’s a lack of communication and consideration,” said Stevens. Once on the train, Stevens said the speakers in each car need to work, and there should be some uniformity to the conductor’s announcements. “We had one conductor announce all of the stations and what the connections were. It made all the difference in our ride.”

Deng and Stevens both noted that it was frustrating to pay full price for a service that’s so broken.

Still, Metro riders say they’re ready to get through the worst of it if it means having a reliable transit system.

“We want to fix it now before something even worse happens and it becomes an emergency. I just hope they can stick to their timeline,” said Jessica Mallow, riding the Silver Line. “It’s unfortunate that it has to happen so immediately, but from people I’ve talked to, it seems that most are willing to weather the storm.”