Inside the Alexandria Police Department: Street to Cell
Votes

Inside the Alexandria Police Department: Street to Cell

The Alexandria Citizens’ Police Academy is a 10-week course hosted by the Alexandria Police Department (APD) to offer citizens a better understanding of how the department works. Throughout the course, participants sit in on emergency calls and ride along with police officers on patrol. In the ninth week of the course, citizens met the traffic section on the frontlines of enforcement and Commonwealth’s Attorney Bryan Porter.

Whether it’s being pulled over for a traffic violation or being directed around the site of a crash, virtually every Alexandrian has had some interaction with the Alexandria Police Department’s Traffic Section. The section is broken down into five units: the Motor Unit, Parking Enforcement Unit, the Hack Inspector’s Office, Special Events Unit, and School Crossing guard Unit.

“We’re a bit of a jack of all trades,” said Sgt. Chuck Seckler.

Seckler supervises the Motor Unit, a 10-man motorcycle squad responsible for traffic enforcement and rapid police response to emergency situations. The motor unit is called out to handle major traffic emergencies that involve road closures and detouring traffic, as well as being called out for special events. These types of events include funerals, VIPs, and oversized vehicles. Seckler says the motorcycle’s flexibility and rapid deployment make it a useful tool for the department.

“The motorcycles can go anywhere,” said Seckler, “including some places where cars can’t.”

Within the realm of traffic enforcement, Officer Wesley Vitale focuses on intoxicated drivers. In the past four years, Vitale has given out 125 Driving While Intoxicated citations.

Intoxicated is classified in Virginia as enough alcohol to affect demeanor, personality, or appearance. It’s only when the intoxicated person gets behind the wheel of a car that the exact percentage becomes an issue. 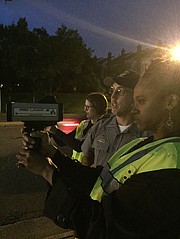 Four beers will usually put a driver at .08 percent blood alcohol content, the legal limit for driving a motor vehicle.

“People think that if you drink water, it makes you less drunk,” said Vitale, “but actually it just makes you more drunk. The alcohol is more easily absorbed with water.”

When approaching a car, Vitale says officers check for noticeable odors. When approaching the car door, drivers check for glassy or bloodshot eyes. Next, the officer asks for license and registration. Vitale said people would be surprised at what gets handed to them at this point. Once, Vitale said someone reached into the McDonalds bag and produced the receipt to the officer.

At this point, the officer can perform field sobriety tests. The officer moves the driver to a safe location and initiates a number of tests. Vitale says the tests are designed to be fair to the driver, so they don’t do the “backwards alphabet” test. But while some tests like the walk and turn or the one leg stand are iconic for DWI stops, others are more telling. Nystagmus is a condition of involuntary eye jerking that, among other causes, is often associated with alcohol consumption. Vitale said that some people have natural nystagmus, so it’s not a 100 percent foolproof test, but that there’s a 75 percent chance that the person is intoxicated.

After the speech and dexterity tests, drivers can take a preliminary breath test. The driver isn’t required to take the test and the results can’t be held against the driver in a DWI trial, but it indicates the level of toxicity for the police officer. Vitale described it as another check to see whether the observations are true or not.

If the driver is suspected to be under the influence, he is taken to the Alexandria Adult Detention Center where a more advanced device can test for alcohol consumption. This reading is the one that is used in court. The machine is hypersensitive to breath and can distinguish between false-readings other tests might get from diabetics experiencing an attack.

Even if the device doesn’t show a BAC over .08, that doesn’t necessarily mean the driver can’t be charged with being intoxicated while operating a motor vehicle. Vitale remembers one driver who blew a .07, but only after he’s previously hit 11 parked cars in a parking lot. But if the officer really wants that BAC to cement the DWI case, he can get a search warrant for the driver’s blood and take him to the hospital to have it extracted.

Bryan Porter is Alexandria’s Commonwealth’s Attorney. As the Commonwealth Attorney, Porter says most of his work is administrative: dealing with budgets and personnel. Most of the times, one of the office’s 14 attorneys handles the day-to-day cases.

However, when there’s a major case, the Commonwealth Attorney sometimes takes the lead. That’s what happened a few weeks into his term when the Alexandria Police arrested serial murderer Charles Severance.

“It’s one of the biggest cases in Alexandria history,” said Porter. “It was very stressful, and sometimes I wondered why I took the job.”

Ultimately, the Commonwealth Attorney’s office won the case, with Severance given three life sentences. So far, Porter says that sentencing was one of the cases he’s most proud of.

“It was a complex, complicated case,” said Porter. “I believe [Severance] posed a clear and present danger. I truly believe, if acquitted, someone else would have died.”

Porter said he was also happy they were able to wrap up the Nancy Dunning murder, which he described as a hole in the local community.

“I will never have a case like that, I don’t believe,” said Porter.

The most disappointing case happened before he was Commonwealth Attorney. Porter was assigned to prosecute Kashif Bashir, the taxi driver who’d shot police officer Peter Laboy. Bashir was found not guilty by reason of insanity and was sent to a mental facility. Porter said he believed the man who assaulted Laboy had prepared the attack in advance and had full sufficient understanding of right and wrong not to be considered criminally insane.

Next week is the last set of classes for the Citizen’s Police Academy, with a look at the communications and resources in the department.