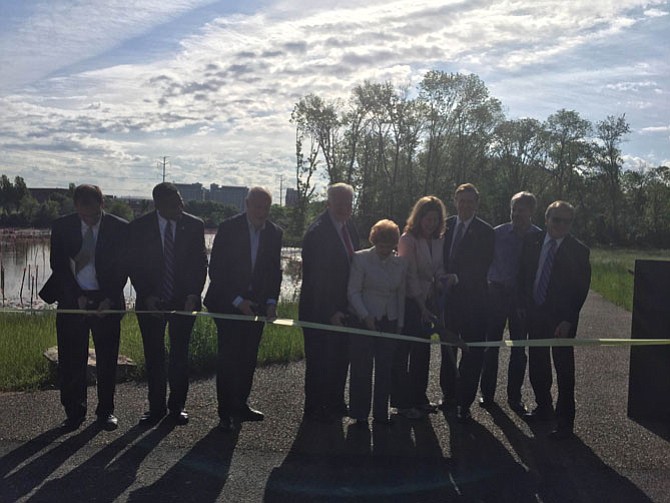 City Officials and citizens cut the ribbon for the new park Photo by Vernon Miles.

Turtles and ducks in the goose-free zone of the restored Four Mile Run.

Dana Wedeles, park planner for the City of Alexandria, leads a group along the new Four Mile Run path.

In the 1970s, Alexandria was desperate. Throughout the ’60s and ’70s, Four Mile Run along the city’s northern border with Arlington was flooding. Former U.S. Rep. James Moran remembers seeing the damage as the waters swept through Arlandria, pushing people out of their homes and destroying what was left. The city turned to the U.S. Army Corp of Engineers, who dredged the creek and poured in a concrete foundation. In a way, the city was saved, but this also created a new problem. The concrete works destroyed many of the natural habitats that were formed along the stream, and the creek was transformed into a lifeless gully.

One of the most visibly striking aspects of the park, currently, is the field of bright pink ribbons tied to stakes in the tidal basin. When Moran rounded the corner and saw the basin, he said that for a moment he thought for a moment that the wetlands was home to a flock of flamingos. Dana Wedeles, Alexandria park planner, said the ribbons are set up to keep the geese away from eating the still-growing plants before they can become established. The flagging is expected to be removed in November once the plants are grown.

Aside from geese, Wedeles said the new park has a variety of wildlife, from turtles to foxes and deer. While walking along the trail, Wedeles pointed off to the side where several animal tracks were visible in the mud.

The project still has a few challenges. The restored wetlands area is regularly sprayed for invasive species, but just upstream the coast is littered with invasive plants. Garbage also floats down the creek and onto the shore from upstream, but Wedeles said there’s not much can be done about that. Similarly, trash is always found at the same spot around the first curve from the path, where people can meet without being seen from the street. Police have been notified of the blind spot.

The biggest problem, however, is that shortly past that bend, the trail ends abruptly. The path slopes up near a tributary and stops with an orange construction sign. On the far side, a landing is visible where a bridge could easily connect coastline, and connect to the Mount Vernon trail nearby, but no connection currently exists.

“The grant was only for environmental sustained benefit,” said Wedeles. “That does not include a bridge.”

Wedeles said the city is currently in the process for bridge design in the fiscal year 2018 Capital Improvements Budget.