Bracing for shutdown "surges" in face of Metro crisis 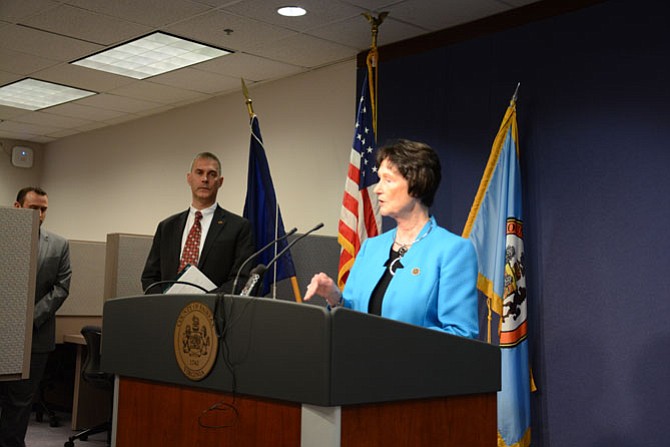 Fairfax County Board of Supervisors Chairman Sharon Bulova called the maintenance situation that brought about Safe Track “unfortunate” but supports the effort as “the right thing to do.” Photo by Tim Peterson.

After June’s kickoff, Metro repairs are scheduled to last until March 2017, WMATA representative Jack Requa (center) told members of the Fairfax County Board of Supervisors Transportation Committee in a May 24 meeting.

During most safety surges, Fairfax Connector will provide supplemental express service on existing routes or on rush-hour shuttles.

*Supplemental trips in the Dulles/I-66 corridor on express Route 599 from Reston to Pentagon.

*Express rush-hour shuttle service from Vienna Metrorail Station via I-66 to Pentagon.

SafeTrack supplemental and shuttle service fare is $4 per trip.

If you use Metrorail from Vienna or Reston or Tysons, be on notice: the Orange and Silver lines will be the first affected.

Beginning June 1, the Washington Area Metropolitan Transit Authority (WMATA) will initiate the first of 15 “surges” of rail system shutdowns for maintenance, as part of its robust “Safe Track” effort.

Safe Track is advertised as condensing three years of work down to about one.

The severe timetable comes following a series of maintenance incidents including cars filling with smoke and fireballs sparking inside underground stations.

“It’s unfortunate,” said Fairfax County Board of Supervisors Chairman Sharon Bulova, that the rail system has arrived at this point “without what should have been plans for investment, replacement.”

Regardless, the chairman said she’s supportive of Safe Track and that it’s “the right thing to do.”

After June’s kickoff, the repairs are scheduled to last until March 2017, WMATA representative Jack Requa told members of the Fairfax County Board of Supervisors Transportation Committee in a May 24 meeting.

The first surge from June 4 to 16 will cause the Orange and Silver lines to run on continuous single-track status from East Falls Church to Ballston. To supplement the slowed service, WMATA is offering limited Metrobus shuttles.

For other surges, there will be supplemental service from Fairfax Connector buses.

In addition to the alternate public transit options, Bulova and Fairfax County Department of Transportation Director Tom Biesiadny also encouraged people to look into carpooling and ride-sharing as much as possible during the surges.

Bulova also said she’s sent a letter to employers around the Fairfax County encouraging them to be more flexible with employees looking to telework.

“We’re not crying over spilled milk here,” she said. “Right now we have a crisis. We have to make sure we’re flexible. People are resilient; we’ll find a way to get through this.”

Fairfax County has launched a website listing the dates and details of the surges, along with suggestions for alternate transit. The website address is www.fairfaxcounty.gov/fcdot/safetrack.