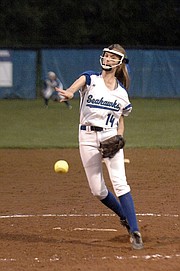 Aly Rayle, seen earlier this season, and the South Lakes softball team defeated South County on May 26 in the 6A North region quarterfinals.

The 2015 South Lakes softball team ended its season with a loss at South County in the opening round of the 6A North region tournament. The Seahawks had their best season in years but weren’t able to knock off the defending state champions.

One year later, an improved and more experienced South Lakes team returned to Lorton for another crack at the Stallions. This time, it was the Seahawks who walked away a winner.

Second baseman Calista Somer drove in a pair with a bases-loaded single in the top of the eighth inning, sophomore pitcher Aly Rayle tossed a four-hit shutout and South Lakes defeated South County 2-0 on May 26 in the region quarterfinals.

The Seahawks, who earned a rare region tournament victory over Battlefield in the opening round on May 24, will travel to face Madison in the semifinals at 6:30 p.m. tonight.

While Rayle shut down South County, the Conference 7 champion, South Lakes left eight runners in scoring position through seven innings and the teams went to extras locked in a scoreless tie. South Lakes loaded the bases with one out in the eighth, but after a foul out to the catcher, the Seahawks were in danger of squandering another scoring opportunity.

That’s when Somer, a four-year varsity player, stepped up.

After falling behind in the count 0-2, Somer smacked an opposite-field single to right, which drove in the first runs of the game and gave South Lakes a 2-0 advantage.

“Eleni [Petersen] was on third one time with two outs [in the fourth inning] and I ended up [making an] out,” Somer said, “so I didn’t want it to happen again.”

Somer was 0-for-3 in her three at-bats prior to delivering the game-winning hit.

“She’s not shy,” second-year head coach Carlos Soto said. “... If you challenge her, she’s going to come right back at you.”

Rayle retired South County in order in the bottom of the eighth, putting the finishing touch on a complete-game shutout.

“It’s really exciting,” Rayle said about helping South Lakes softball improve. “You can just feel the energy in the dugout and the energy at practices. You can really feel how motivated we are to improve our program.”

South County pitcher Aubrey Bates suffered the loss. The senior allowed two earned runs and nine hits in eight innings. She walked three and struck out six. She pitched her way out of several jams before surrendering two runs in the eighth.

“She was in trouble all night and we found ways out of it,” Dillow said. “Just real proud of her. She pitched her heart out like she does every time. Shut a team out for seven innings, it should be enough. We just didn’t get her any runs.”

The winner of tonight's South Lakes/Madison game earns a state tournament berth and advances to the region championship game. The Seahawks suffered a 2-0 road loss to the Warhawks on April 5 and were on the wrong end of a 2-1 home game on April 29 that lasted 10 innings.

“It’s crazy,” Somer said. “We’ve come such a long way. We did to them what they did to us last year.”