Picture Worth a Thousand Words
Votes

Picture Worth a Thousand Words 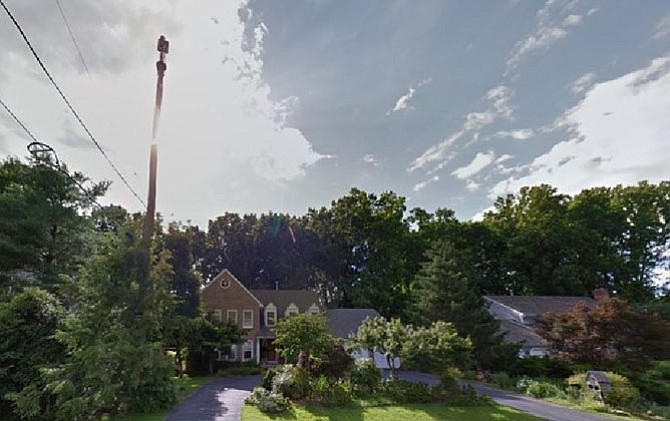 Well over 250 people packed a Town Hall meeting on Oct. 26 to hear what Montgomery County Council members had to say about plans to install more than 700 cell phone towers stretching 30 to 60 feet high in the front yards of Montgomery County residents, including many in the Potomac area, such as the one seen here (above) on Brickyard Road.

Council President Nancy Floreen and other council members are pushing a special exception that would allow telecom companies to install the towers without prior notice to residents. Citizens of North Potomac and Gaithersburg are asking for a moratorium until the entire effort is scrutinized for its health and aesthetic impacts. Many residents assert that the Tower Committee, which is charged with approving the telecom applications, has not been doing its job and has not been following the law (Montgomery County Code 2.58E).

Ms. Floreen and her colleagues on the County Council say they want the emphasis to be on a streamlined process but they also claim they want to minimize adverse impacts upon citizens. Many in the community, including those working for the EPA, have raised concerns about the potential health effects on children whose brains are still forming, of placing towers in such close proximity to homes. These towers will hold 300-pound boxes of electro-magnetic equipment. Not surprisingly, residents are also concerned about the impact the towers will have on the market values of their homes.

The Tower Committee has already approved dozens of applications to install cell towers in Gaithersburg and North Potomac for a company called Crown Castle, which works for bigger providers such as Verizon and AT&T.

Council members at last week’s Town Hall meeting refused to make any commitments, arguing they have no choice with the “heavy hand” of the federal government, specifically blaming the FCC. Council Member George Levanthal claims the council is forced to install these towers quickly, to be ready for the future, and 5g phones. Mr. Levanthal’s response to my Facebook posting on the controversy was, “My colleagues and I would like to protect homeowners against these things but Congress legislated with a heavy hand to ensure approval for telecommunications companies. We're going to keep working on this but our options are limited under federal law.” However, we believe it is well within the Montgomery County Council purview to further scrutinize cell tower applications and place some restrictions on the locations of future installations.

The Tower Coordinator, rather than scrutinizing these applications, has done little more than provide brief summaries of the carriers’ own words to the committee and advised the committee to recommend approval or conditional approval. Not one application has been denied. In fact, some activists say the Tower Committee shuns and sometimes refuses public participation at the meetings, which could expose errors in the application process. Activists assert that the Tower Committee, which only meets once a month via teleconference, routinely fails to check locations of permit applications or land owner approval.

If a telephone pole or tower already exists in an easement area, the company is not obliged to inform a homeowner of plans to install the new equipment. But if a higher pole must be installed or an existing one modified, they need permission. Council President Floreen wants to do away with that law.

If you don’t want to see 30- to 60-foot cell towers installed in your neighborhood, get involved. Write or call Nancy Floreen and other members of the Montgomery County Council and tell them what you think. Momentum is building, but the only way to stop these towers from being installed is to speak up now. They are scheduled to go forward in November.

The Oct. 12 WMCCA General Meeting had a last minute change in speakers: Susan Fitzpatrick, president, North Potomac Citizens Association, and Aaron Rosenzweig, City of Gaithersburg resident, both spoke to the attendees concerning the residential cell tower issue and notifed everyone about the Oct. 26 public meeting at Ridgeview Middle School.

Help support our efforts in defending the Master Plan. Renew or become a new member of WMCCA. Look for your renewal notice in the mail or go to our website to download a membership form or join using PayPal: www.wmcca.org

The West Montgomery County Citizens Association will meet at the Potomac Community Center on Wednesday, Nov. 9, at 7:15 p.m. If schools are closed because of inclement weather, the meeting will be cancelled.

The speaker will be Barry Fuss, chief of Bridge Design, Montgomery County Department of Transportation. He will discuss current conditions and the considerations given to maintaining and repairing rustic road bridges.

The Potomac Subregion has a number of rustic roads. Because of proximity to the river, these roads cross many streams. Potomac's Glen for instance, has two stream crossing bridges: One over Watts Branch and another over the Kilgor Branch. Glen Mill Road crosses the Piney Branch. Glen Road also crosses the Sandy Branch. Old Quince Orchard Road crosses the Muddy Branch.

As always, the public is welcome to attend WMCCA meetings.