“Of course they say at the city that this has been a success because the congestion has increased, therefore its slower.” 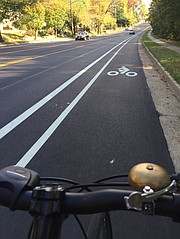 Traffic is slower on King Street. That was part of the city’s Complete Streets goal; to slow vehicular speeds on the stretch of road between T.C. Williams High School and the Masonic Temple. But while some have praised the city’s traffic calming measures, local residents say the changes have made an already tightly congested street worse.

During the street resurfacing, the street layout was changed to eliminate an eastbound and westbound lane at separate parts of the road and add in bike lanes and a pedestrian island. Speed on the street was also reduced from 35 miles per hour to 25.

According to Yon Lambert, director of Transportation, any streets scheduled to be resurfaced are reviewed to see if changes can be made to enhance safety and ease of navigation. Lambert said the majority of the feedback they received from parents at TC and community residents was that changes needed to be made to make the street safer for pedestrians and bicyclists. Lambert said local residents and parents of students at T.C. Williams had expressed their concerns about traffic speeds near the school during the review process.

Dr. Jesse Dingle, principal of T.C. Williams High School, said the changes have made the street safer for students walking to the school.

“We don’t want to wait for something to happen,” said Dingle. “We want to be proactive. This was a primary concern. Now, there are several places that are great to cross.”

“It hasn’t been an unmitigated success,” said Marguerite Lang, president of the Rosemont Civic Association on the north side of King Street. “Of course they say at the city that this has been a success because the congestion has increased, therefore its slower.”

Crystal Nosal, public information officer for the Alexandria Police Department, said the traffic enforcement unit looks for increases in requests for traffic units to identify problematic locations. But Nosal said the unit had not received an unusual increase in requests for traffic enforcement. But anecdotally, local residents say the traffic has gotten noticeably worse.

“When I go on that piece of King Street, the traffic has increased,” said Lang. “It makes it difficult because, with bike lanes, a lot of the traffic is having to work in a very small space. People can’t get around you if you’re having to turn left. Every time you narrow a road, you’re going to have longer lines, more congestion, and the traffic will be slowed.”

According to Lang, the Rosemont Civic Association had recommended that the plan be sent back to the drawing board

“The fallout is exactly as predicted, to take four lanes and go down to two means traffic has ground down to a halt during rush hour,” said Klas Ringskog, a local resident. “People try to avoid King Street and jam side streets. This is a disaster. The worst off are those with properties directly off King Street. They have a difficult time getting out. At times they get desperate and they gun it. We’re just waiting for accidents to happen.”

Lambert says with less than two months of implementation, the street’s users are still in an adjustment period and the data on the traffic impact has not been fully established.

“Over time, I think people will become more used to the road and that the changes will have more beneficial impact,” said Lambert.