Springfield: Discovering the Value of Intelligence 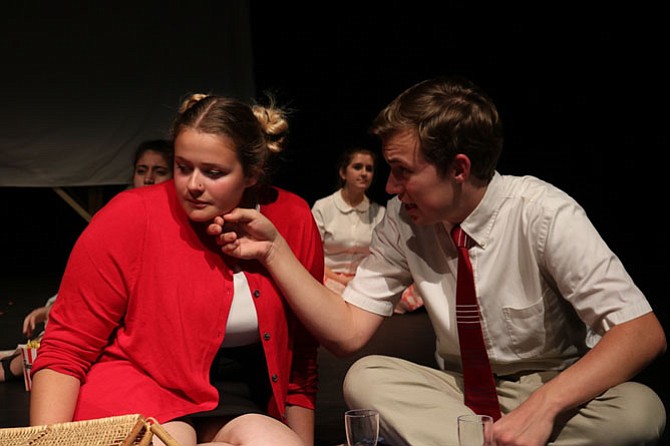 From left to right: Madison Sterner and Nicholas Riehle

Springfield — ”Who’s to say that my light is better than your darkness?” questions Charlie Gordon, after a life-altering operation leaves him with an IQ of 185 and a myriad of emotional scars. Through his journey, Charlie discovers the truth about the value of intelligence. The cast and crew at Thomas Edison High School eloquently delved into the deep themes of “Flowers for Algernon” in their poignantly thoughtful production.

“Flowers for Algernon” is a play based off of a science fiction novel of the same title, written by Daniel Keyes. The novel was first released as a short story in 1958 and due to its popularity, was released as a full book in 1966. David Rogers then adapted the novel into a play in 1969.

When scientific findings discover a new, revolutionary operation that could increase intelligence, a mentally disabled man named Charlie Gordon seizes the opportunity to be the first man to receive the surgery. The only catch - the operation has only ever been performed on a mouse. But, with the help of the scientists and his teacher, Alice Kinnian, Charlie’s intelligence skyrockets. While Charlie discovers the intellectual concepts the world has to offer, he also discovers the emotional depths of his mind.

Nicholas Riehle respectfully yet accurately conquered the difficult role of Charlie Gordon. Riehle demonstrated the transitions in Charlie’s intelligence, with distinct physicality and vocal qualities. At the beginning of the play, he exuded the childlike innocence of Charlie and later transformed into a bitter genius. His compelling portrayal represented the arc in Charlie’s character. Riehle exhibited the complex relationship between Charlie and his teacher Alice, played by Madison Sterner. Sterner exposed the raw emotions of the caring Alice, as she worries over his well-being.

Charlie’s doctors, the scientists, were portrayed by Timothy Etter, Max Bertman, and David Leavitt. The trio of men showed a range of attitudes towards the experiment. Timothy Etter played the concerned and sensitive Dr. Strauss, while Bertman embodied Professor Nemur, the established scholar with a hunger for success. Leavitt portrayed Burt Seldon, the naive grad student who uncovers the sensitivity of Charlie’s situation through the mundane tasks of the experiment. The cast was rounded out by a few light-hearted characters, most notably Charlie’s landlady, Mrs. Mooney, played by Maggie Landis. Landis equipped herself with a convincing vocal tone and infectious charm.

A minimalist set decorated the scene with just a few delicate pieces. A bakery case with real bread and realistically adorable pink cakes contrasted with the table and equipment in the lab. The set featured a large central translucent screen utilized to show silhouettes as the light was cast upon them. The silhouettes created vignettes throughout the story that depicted memories from Charlie’s dark childhood. Effective choreography and staging revealed only what Charlie could remember - shadows of his past. The evolution in the costumes highlighted the shift in Charlie’s life, adorning him with a vibrant baseball cap in the beginning of the play and later transitioning him to a tan suit.

In “Flowers for Algernon,” one simple mouse changes a man’s life forever. The committed cast and crew at Thomas Edison High School imprinted the audience with important messages about human decency and emotion. Touching themes and heartfelt moments colored the stage in their beautiful production.