Comedy about two women fishing on the Alabama Delta and their tumultuous relationship. 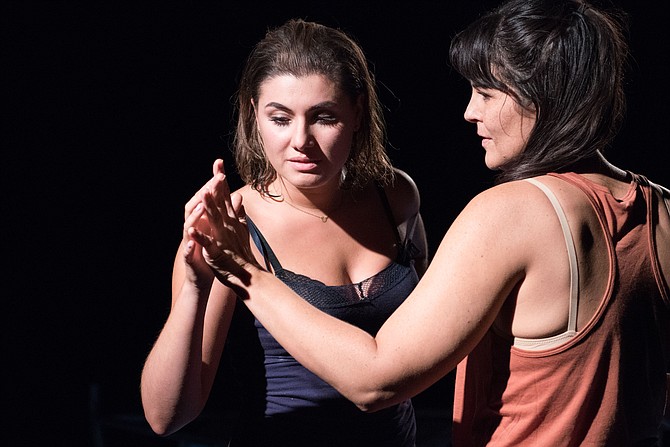 Rachel Zampelli and Maria Rizzo star in Signature Theatre's production of "The Gulf" now through Nov. 6, 2016. Photo by Margot Schulman

Rachel Zampelli and Maria Rizzo star in Signature Theatre's production of "The Gulf" now through Nov. 6, 2016.

Rachel Zampelli and Maria Rizzo star in Signature Theatre's production of "The Gulf" now through Nov. 6, 2016.

Signature Theatre's ARK theater in Arlington is staging "The Gulf" by Audrey Cefaly from now through Nov. 6. The world premiere comedy is about Betty and Kendra who waste away a summer day fishing on the Alabama Delta. Suddenly, their lazy afternoon turns to chaos when the motor breaks, stranding the two, and their tumultuous relationship, in the Gulf.

Director of New Works Joe Calarco ("The Flick") helms this funny and fierce comedy, starring Rachel Zampelli and Maria Rizzo, by D.C. playwright Audrey Cefaly ("Maytag Virgin"). Cefaly is a Southern writer whose work draws its inspiration from the Gulf Coast and her home state of Alabama.

Rachel Zampelli plays the role of Kendra, who is "brave as hell but doesn't talk about it.”

“She just is. She enjoys the simple things; she's a badass," she said.

She said some of the challenges in working on the piece were the mechanics of the boat and her interaction with it. "I have to act like I'm pushing the boat along and act like I'm stopping the boat as well. So to make it look realistic I had to work on it a lot," she said.

She said she hopes the audiences take away something personal. "No matter what that means for each individual, I just hope it truly resonates in some special way in each audience member's heart."

Maria Rizzo plays the role of Betty, a bartender with big dreams to get her degree in social work and break out into the world. "She takes up space, in all ways; she is restless and eager and loves hard," she said.

As far as challenges, she said: "I've never been in a production where the cast was made up of two people. It takes so much more focus and listening. I've learned so much from this challenge," she said.

She added: "The Gulf (for me) is about two women who love deeply and drain themselves in the process of the gulf that's between them. I hope audiences never have to identify with heartbreak like this but the truth in this text is so beautifully relatable and exciting to witness."