The Trump Question? Asked and Answered 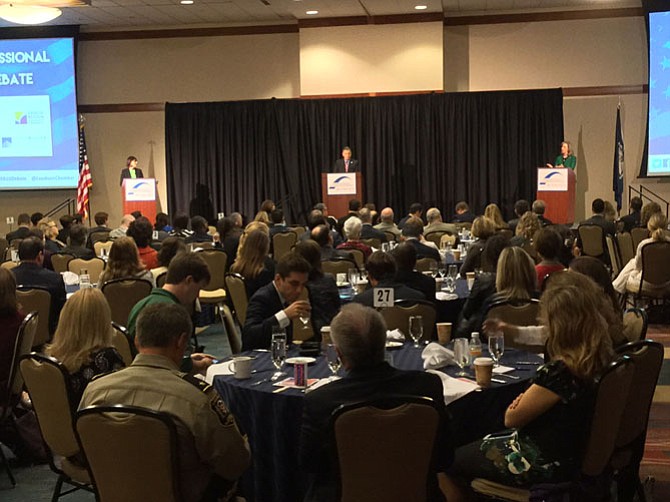 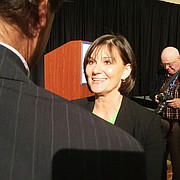 U.S. House of Representative 10th District candidate LuAnn Bennett (D) speaks to reporters after the first debate between Bennett and U.S. Rep. Barbara Comstock, the Republican incumbent. The debate was hosted by the Loudoun County Chamber of Commerce on Thursday, Oct. 6. 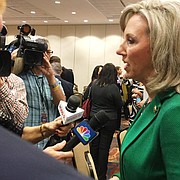 Congresswoman Barbara Comstock (R-VA) released the below statement after the House passed the bipartisan H. Res. 11 to Reject the Anti-Israel UN Resolution, a resolution that Congresswoman Comstock co-sponsored, by a vote of 342-80-4: 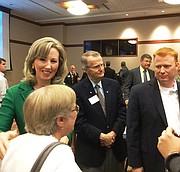 U.S. Rep. Barbara Comstock (R-10) addresses media and supporters after the first debate between Comstock and Democratic challenger, LuAnn Bennett. The debate was hosted by the Loudoun County Chamber of Commerce on Thursday, Oct.6. 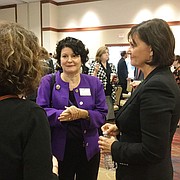 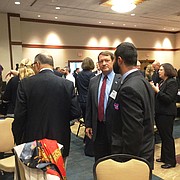 At the first of two 10th Congressional District debates on Thursday, Oct. 6, Democratic challenger LuAnn Bennett was not shy about hanging the Trump albatross around the neck of freshman Republican U.S. Rep. Barbara Comstock.

“Barbara Comstock stands for Donald Trump," Bennett said in her opening statement. “Trump's extreme agenda would cripple our economy, jeopardize our security, punish women for making their own health care decisions and, worst of all, the Trump agenda deeply divides our country.”

Comstock never mentioned Trump’s name during the hour-long debate, continuing her efforts throughout the campaign to avoid any firm statements about the controversial GOP nominee. She is seeking re-election in a seat which has long been in Republican hands, but in a district won by Barack Obama in each of the last two presidential elections.

As of Thursday morning’s debate, Comstock had neither endorsed Trump nor publicly repudiated him, saying only that the Republican nominee would have to “earn” her vote.

LESS THAN 48 HOURS LATER, Comstock’s equivocation came to an end, after a 2005 tape surfaced in which Trump is heard making lewd comments, in explicit language, bragging about his unwanted advances on other women. “When you’re a star, they let you do it. You can do anything,” Trump said on the tape obtained by The Washington Post.

Bennett was the first of the candidates to respond, stating “Trump’s actions are vile and disgusting.” She again tied Comstock to the GOP presidential nominee, saying (Comstock) “has stayed silent through Trump’s insulting of immigrant families, military families and women.”

That silence did not last long. Comstock issued a statement late Friday night, condemning Trump’s remarks, announcing that she would not vote for Trump, and calling for Trump to step aside as her party’s nominee.

“This is disgusting, vile and disqualifying,” Comstock said in the statement. “In light of these comments, Donald Trump should step aside….I cannot in good conscience vote for Donald Trump and I would never vote for Hillary Clinton.”

Comstock apologized for being “late” with her statement, noting that she was attending her son’s rehearsal dinner when the latest Trump story broke.

Neither candidate could have predicted the latest (and ongoing) drama surrounding Donald Trump during their first 10th Congressional Debate, hosted by the Loudoun County Chamber of Commerce. The debate focused mainly on business and economic issues.

The candidates took questions on everything from clean energy and immigration reform to the federal minimum wage and union regulations.

Her voice raspy from back-to-back campaign events, Comstock appeared comfortable speaking in front of the pro-business crowd of about 200 people. “You know me,” Comstock said to the audience, who applauded the incumbent several times during the one-hour debate. “You know I will fight for you,” Comstock said.

Despite some jeers and laughter from the audience during Bennett’s comments on the Affordable Health Care Act, the political newcomer remained composed throughout the debate.

BENNETT OFTEN SPOKE directly to the audience, reminding the crowd of business leaders that she, too, understood the challenges and complexities of building a successful small business. She spoke about moving to Great Falls with her husband and starting a small real estate business 35 years ago, then running that company as a single mother after her first husband died of leukemia in 1994.

“I want to take my experience as a small business owner and get Congress working again and help build an economy that works for everyone,” she said. “Barbara Comstock went to Congress and fit right in with a dysfunctional and obstructionist government.”

During an exchange about how to improve Metro’s safety and service, Bennett attacked Comstock’s record, sharply criticizing the incumbent for voting against Gov. Bob McDonnell’s landmark transportation bill while Comstock was in the Virginia House of Delegates. The bill included millions in funding for the Metro’s Silver Line extension to Loudoun County.

Comstock shot back: “I am the only one on the stage working closely with Metro to restore safety.” She defended the work of the GOP-controlled House of Representatives; she said she was successful protecting Northern Virginia’s interests with the House leadership, and had persuaded Republicans to restore $75 million in funding that had been cut from the Metrorail system.

As the only Republican in Northern Virginia’s congressional delegation, Comstock said she was the only person in the race “that will actually be in the majority, and will serve as a chairman” of a congressional subcommittee.

Bennett shot back that “She’s part of a majority that can’t pass a budget.”

While Bennett repeatedly tried to yoke Comstock to Trump and his controversial statements and policies, Comstock took aim at Bennett’s top-of-the-ticket nominee, saying Bennett supported “the trillion dollar tax plan that Hillary Clinton would put forward” a plan that will “kill the small businesses.”

AFTER THE DEBATE, Comstock told reporters that she thought Bennett’s attempts to tie her to Trump were “sad.”

“It’s sad she is focusing on this…I am focusing on being the best congresswoman for this district.”

Virginia’s 10th Congressional District, which stretches from McLean suburbs to the exurbs of Winchester, is thought to “lean slightly” Republican.

The second and final faceoff between the two candidates will take place on Wednesday, Oct. 19 in Tysons at the Northern Virginia Chamber of Commerce offices. The chamber says that debate “will cover several issues at the intersection of federal policy and business.”