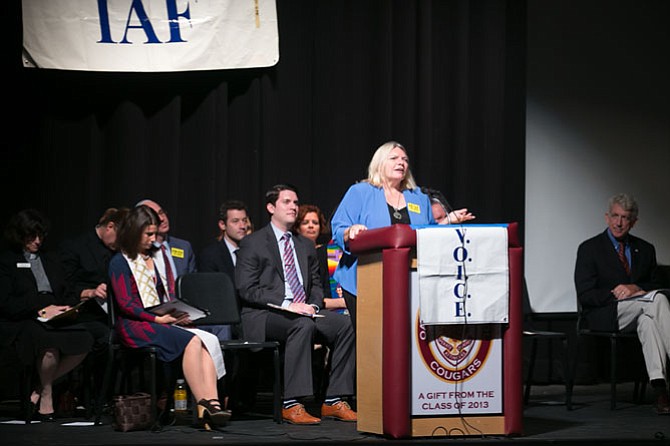 Before 1,100 faith community leaders at Oakton High School on Oct. 16, Attorney General Mark R. Herring added his name to those of more than 105 other state and elected officials around the country who are calling on gun manufacturers to step up gun safety efforts.

This market-based approach to reducing gun violence is the brainchild of Metro IAF, a collective of local and regional citizens power organizations including VOICE (Virginians Organized for Interfaith Community Engagement) comprised of more than 50 Christian, Muslim, Jewish, and Unitarian faith institutions, higher education institutions, and school parent/teacher groups in Arlington, Fairfax, and Prince William Counties and the City of Alexandria.

VOICE is urging state officials and Northern Virginia officials and law enforcement leaders to sign on to its Do Not Stand Idly By gun violence prevention campaign, which urges gun manufacturers to step up smart-gun research and development.

Herring was one of the state and local leaders speaking to the 1,100 VOICE leaders gathered to launch a new, 4-year organizing agenda to build power to effect change on issues of concern to Northern Virginia residents.

The new campaign, based on listening sessions with 3,000 NoVa residents, will challenge state and local officials to work with VOICE to increase investment in affordable housing, expand pre-k for low-income families, strengthen public education, tackle the roots and effects of the unjust and inequitable criminal justice system, combat the climate of racial-ethnic and anti-Muslim intolerance, work for immigration reform, and improve gun safety and police-community relations.

VOICE leaders said the organization is moving aggressively to increase its membership and build more power to achieve the changes that are needed to enable Northern Virginia to live up to its promise of a high quality of life for all residents and to enable the region to attract new jobs and sustain economic vitality.

“We get things done,” the Rev. Dr. Linda Olson Peebles of the Unitarian Universalist Church of Arlington, emphasized after reciting a litany of VOICE successes over the past eight years since the organization’s founding. “This is what democracy looks like.”

For information on VOICE, see www.voice-iaf.org.