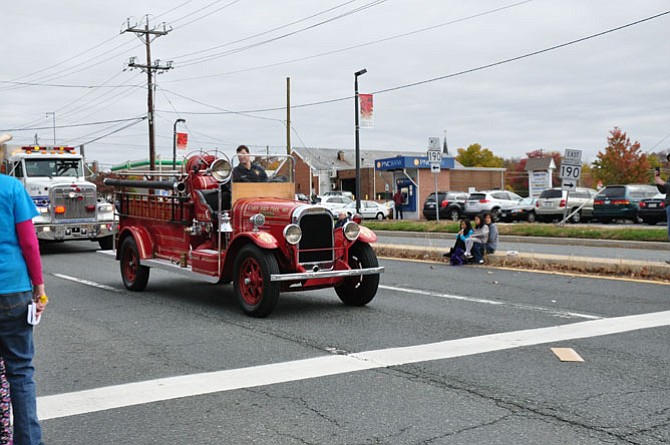 What better way to celebrate Potomac's honorees for the Citizen of the Year, Youth of the Year and Business Leader of the Year than riding at the head of the Potomac Parade — and recognition at Potomac Day 2016?

Mary Kimm, editor and publisher of the Potomac Almanac and Connection Newspapers; Attorney Fred B. Goldman, Esq. and Landon student Arslon Humayun are the leaders who have been chosen by the Potomac Chamber of Commerce for this honor. 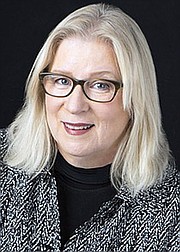 Children watch from along the parade route.

Potomac Citizen of the Year, Kimm is an award-winning journalist, opinion writer and editor and publisher, managing through the changes in media for more than 25 years. As editor and publisher of Connection Newspapers, parent of the Potomac Almanac she has led the newspaper group to hundreds of press awards for investigative reporting, public service, editorial writing, news and election coverage, special projects, feature writing, sports, design, photography and more. Kimm has worked at the newspaper chain in a variety of roles since 1989.

Kimm's family moved to Potomac in 1976 and she attended Potomac Elementary School for sixth grade. At the time, the Potomac Almanac wrote a short feature welcoming every family that moved in, written by Pat Dunnavant. Kimm, the mother of two PhD scientists, enjoys kayaking the Potomac River, birding, photography and horseback riding. She says, "Aside from the great people, the Potomac River is my favorite part of Potomac."

Kimm said, "I'm delighted to be named Citizen of the Year by my friends at the Potomac Chamber of Commerce. I've been involved with the Chamber for more than 20 years, and as an organization and a dedicated group of people, the Chamber has always been supportive of the best parts of Potomac. The Chamber has embraced the importance of preserving the environment and helping others as part of preserving Potomac's true character. I'm honored to be named Citizen of the Year following others like Bob Hanson, Daniel and Susan Pereles, George and Ginny Barnes and others who have done so much."

Kimm has been actively involved in police reform, serving on the Fairfax County Ad Hoc Police Practice Review Commission, now helping to implement recommendations made in the wake of police shooting of an unarmed Fairfax County, Va. resident. Kimm also serves on the governing board of the Fairfax-Falls Church Partnership to Prevent and End Homelessness and on the board of directors of the Boys and Girls Clubs of Greater Washington Fairfax Region. She also serves in numerous community organizations, including the Potomac Chamber of Commerce.

She is particularly devoted to the Potomac Almanac, the hometown community newspaper that was established in 1957. The Almanac earned its distinction as Newspaper of the Year by the Maryland, Delaware, DC Press Association for 1998, 2001, 2002 and 2003.

Kimm began her journalistic career with the Potomac Almanac as a freelancer covering high school soccer. One soccer coach asked her, when she began conducting her interview, "Do you know this game?" Kimm had no difficulty answering, "Not at all. That's why I'm asking all these questions."

Kimm has also been involved in engaging the public with her editorials, often emphasizing transparency in government and civic involvement. At the last rewriting of the Potomac Master Plan, the blueprint for land use in Potomac for two decades, Kimm used the newspaper as a public service to engage the public. Whether it's Potomac's two-lane road policy, the threat of a Techway through Potomac, the Brickyard Farm, the health of the Potomac River, chances are Kimm has been there and advocated for the community, land, river, birds and wildlife the same way she has for decades. 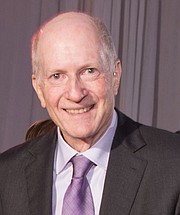 Children watch from along the parade route.

POTOMAC BUSINESSMAN of the Year Fred Goldman has lived in Montgomery County since 1963 and in Potomac since 1971. He has served as a member, officer and director of the Potomac Chamber of Commerce for over 25 years. He has also delivered welcome baskets for the Chamber for many years and served as chairman of the Chamber Awards Committee for the past eight years.

"I've helped with Potomac Day for years and years," he said. "Sometimes I would come early to help the vendors with the set-up process and other times I would be helping in other capacities. I love living in Potomac and cherish Potomac Day because it is a wonderful way to celebrate our community and for neighbors to get together."

Goldman was born and raised in D.C. and graduated from George Washington University and the Georgetown University Law Center. After working for Price Waterhouse as a CPA and The Macke Company as director of taxes, he opened his own law practice concentrating on business and tax law and estate planning and administration.

Goldman has volunteered in many capacities over the years. He served on the board of directors and as general counsel of the Washington Hebrew Congregation. Having been active in his youth, he was asked to help establish a tax exempt foundation, Friends of BBYO, to raise money for the D.C. area chapters of the B'nai B'rith Youth Organization (BBYO) when the parent corporation had to cut funding. His involvement included establishing annual galas that raised substantial contributions for the D.C. region chapters of BBYO.

"I love living in Potomac because of the wonderful friends we have made, great schools and diversity of activities available to us, especially the C&O Canal,” Goldman said. “We are fortunate that our kids and grandkids all live in the area and my wife and I can spend a lot of time with our four grandchildren. I like to bike with my 16-year-old grandson. When he was 10 we biked the entire C&O Canal Towpath and last year we biked the great Allegheny passage, which is the continuation of the towpath to Pittsburgh. Both were great bonding experiences. I also love the fact that I can even bike to work.

"All in all Potomac has been a wonderful place to raise a family and I feel humbled by this award because the Potomac community has given me and my family more than we can ever repay." 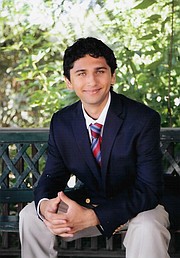 POTOMAC YOUTH of the Year is Arslon Humayun, a senior at the Landon School. Arslon excels in academics, artistically, athletically and is also an ethical leader in the community.

John Botti, Arslon's faculty advisor at Landon for three years said, "I have never been associated with a young man more conscientious, humble, generous and grateful."

His honors geometry teacher, Steve Sorkin said, "The sincerity that he brings to his studies not only enhances his learning but enhances the entire class. He is relentless in terms of seeking comprehension beyond mere information."

Arslon has lived in Potomac his entire life and enjoys the diverse and active intellectual culture. He has had the opportunity to celebrate religious and cultural festivals with his friends of many different traditions and to learn from both business leaders and entrepreneurs.

Arslon earned the highest grade point average in the junior class at Landon. He is a member of the Chamber Singers and the Landon soccer team. He serves as a "prefect" — an on-campus ethical leader who was chosen by the Upper School students and faculty members. He co- founded the Peer Tutoring Club and is also a leader of the Peer Counseling Club. He is a member of the Multicultural Student Alliance and president of Landon's Eastern Cultural Association which encourages discussion of issues affecting Asian-American and Indian-American boys.

"I am both proud and humbled to be chosen for this award,” he said. “I hope to represented my friends, family and mentors well and to use this award as further encouragement to strive to make a positive contribution to the community."

When asked what he would like to see for Potomac in the future, he replied, "As a part of the country with such a high concentration of both intellectual and financial resources, located so close to the capital of the the most powerful nation on earth, I believe Potomac has an incredible opportunity to positively influence the world. This can happen both through advocacy and leading by example. As a simple example, environmental initiatives can be voluntarily adopted here, shown to work and used as a template for other areas. Because of Potomac's reach, this information could be spread quickly and effectively, both nationally and globally."

All three honorees will be celebrated at the Potomac Chamber of Commerce Awards Dinner at Normandie Farm on Nov. 17.