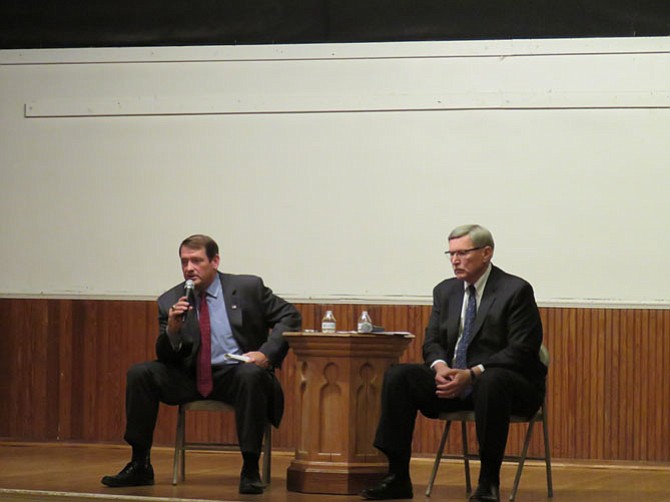 On Tuesday, Oct. 11, the Great Falls Citizens Association hosted debates on two major ballot issues: the proposed Virginia Constitutional Amendment on “Right to Work” and the Fairfax County Meals Tax, a referendum which will be on the November 8 election ballot. The Meals Tax is a tax imposed on the purchase of all prepared or ready-to-eat foods and beverages. It would require all restaurants, grocery stores, coffee shops, movie theater concessions, and any other food service businesses selling prepared food to collect the tax, at a proposed 4 percent rate of the amount charged for the food.

The debate featured Supervisor Pat Herrity (R-Springfield) in opposition to the Meals Tax, and Supervisor John Foust (D-Dranesville) supporting it.

IN HIS OPENING STATEMENT, Foust said that the tax at a 4 percent rate would raise an estimated $99 million by 2018, which would reduce the County’s dependency on real estate taxes and would diversify their revenue base. The Board would dedicate the net revenues to two purposes: 70 percent would be allocated to Fairfax County Public Schools (FCPS), and the remaining 30 percent would be devoted to County services, capital improvements, and property tax relief.

“You all see that the parks, libraries, policemen, and our firemen – well they all cost money,” he said. “But where we really have the challenges right now is in our schools.” The school system has a growing student population of 186,000 students in grades K-12, the tenth largest school division in the country and the third largest employer in Virginia. “Our teachers work dramatically below market, and they are leaving,” Foust noted. A recent report from the Washington Area Boards of Education confirms these disparities in pay, showing a $10,000 difference between the average salary of teachers in Arlington County and those in FCPS, and an $8,000 difference in Falls Church and Montgomery Counties.

Herrity had a different take on the tax. “In the last five years, taxes have increased by 27 percent,” he said. “This regressive tax is not just about white tablecloth restaurants – it’s your morning coffee, your rotisserie chicken, and any prepared meal you may buy.” It is a 4 percent tax on top of the 6 percent sales tax, making it a 10 percent tax on food. “We do have a spending problem, in my opinion,” Herrity says of the Board. “This $100 million raised takes care of this year’s problem but it won’t take care of next year’s – when will it stop?” He addressed some of these spending problems in detail, such as rent controlled condos in Tysons and a $5 million reserve.

LAST YEAR, Herrity noted, the Board gave $89 million to Fairfax County Schools, and only a small fraction of it went toward teachers’ salaries. “The school board needs to focus this toward the classrooms more so than the administration,” Herrity noted. He continued on, stressing that the tax would be unfair to local businesses, and could affect local economies. “This is a tax attacking a single industry, the restaurant industry, without any basis of knowledge of how it will affect these businesses and their employees.”

Great Falls business owner of The Old Brogue, Mike Kearney, agreed with this point. “Of all the different hats I have worn in this community, the one I do not want to wear is that of a tax collector,” he said. “It is unfair. People find affordability, fellowship, and good quality at my restaurant. This 10 percent makes a difference when you’re on a fixed income or a senior citizen, which 30 percent of my customers are.” Tim Thompson, president of the Fairfax County Federation of Citizens Association, disagreed. “I would rather pay this small installment tax than have additional homeowner and real estate taxes to deal with,” he explained. “We need to not cut taxes, but control them.” In the end, it is up to the Fairfax County voters to decide.