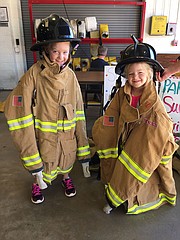 Hayden Brandt, 6, and sister Harper, 4, tried on the safety gear used by firefighters.

See more photos from the open house on Facebook.

The open house hosted by the Vienna Volunteer Fire Department in recognition of fire prevention week is, traditionally, a popular community event that draws hundreds of children and their parents throughout the day. On Oct. 15, VVFD held another of its annual fire prevention fairs to bring attention to fire safety in the home, and to show the community a fun time.

“This gives us the ability to educate parents and children about fire safety and is an opportunity to thank the community for all the support they give us throughout the year,” said VVFD Chief John Morrison.

Many of the children at the open house on VVFD grounds came in costume, directly from the halloween party on the Town Green. The crowd of children was a sea of red plastic fire helmets, the most in-demand freebie at the event. Fire and rescue vehicles were parked in front of the station and open for climbing into. The gurney from an ambulance sat outside the vehicle and children were invited to try it out --- and they did.

The protective gear used by firefighters and EMTs was available for trying on, and the rescue crew helped the children and adults into the heavy, cumbersome uniform. Outside, there was a bounce house, a fire hose for use by kids, and a very intriguing putting-out-a-kitchen-fire demonstration.

As the department always does, volunteers handed out free hotdogs although donations were accepted.

All Fairfax County fire and rescue stations hosted open houses on Oct. 15 from 10 a.m. to 4 p.m. The Vienna Volunteer Fire Department hosts many community events throughout the year, from the traditional “Santa” run the week before Christmas to pancake breakfasts open to the community.